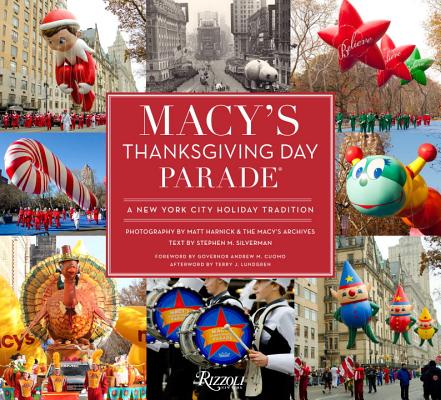 Kick off the holidays with the official 90th anniversary celebration of the Macy’s Thanksgiving Day Parade. The Macy’s Thanksgiving Day Parade has delighted millions of fans in Herald Square and around the world since 1924. The book is filled with exclusive and archival images of the spectacular floating balloons that have charmed millions of old and young alike for decades, and offers readers a never-before-seen look at the planning and preparation of the parade. It also features spectacular images of hundreds of dazzling floats throughout the years and the thousands participating in marching bands and as costumed performers. Of course, Macy’s Thanksgiving Day Parade ends the way the actual parade does—with the arrival of Santa and Mrs. Claus, who welcome the world to start their holidays in the most joyous way possible. With a special foreword written by New York’s own Governor Andrew M. Cuomo, this book is sure to be a perennial addition to every family’s holiday tradition.

Matt Harnick is an independent photographer.

Stephen M. Silverman is a writer whose work has appeared in Esquire, Harper’s Bazaar, Newsweek, the New York Times, and Vogue.

Andrew M. Cuomo is the governor of New York.

"November is coming soon, and you can prep for one of its big annual events with Macy’s Thanksgiving Parade: A New York City Holiday Tradition (Rizzoli). With photography by Matt Harnick and the Macy’s archives, and text by Stephen M. Silverman, it’s a colorful salute to the history and heritage of iconic spectacle of floats, performers, Broadway show casts, the Radio City Rockettes, marching bands, Santa Claus and other stars that has designated the official start of the holiday season since 1924."
—Parade

"On the eve of the parade's 90th anniversary, this colorful book celebrates the spectacular fall classic . . ."
—The New York Times

"The new book, according to press notes, is filled with “exclusive and archival images of the spectacular floating balloons that have charmed millions of old and young alike for decades, and offers readers a never-before-seen look at the planning and preparation of the parade, including a peek into the magic factory located in Bergen County, NJ where a staff of 25 work all year long on The Parade, building floats and designing balloons."
—Playbill.com

"The work, with photography by the son of iconic Broadway composer Sheldon Harnick, explores the history of the annual Thanksgiving Day Parade."
—Theatermania

"This is a terrific gift book for anyone with memories of the parade, those who can’t watch the event in person, tourists. It's THE perfect present if you’re going to someone’s home on Thanksgiving.(Both Amazon Prime and Barnes & Noble promise to deliver in 24 hours.) Vibrant photos give one a real feeling of the tradition, while text by Steven M. Silverman is as entertaining as it is illuminating."
—Woman Around Town

"The oversized hardcover features nearly two hundred photographs by Matt Harnick and the Macy’s Archives that reveal the before, during, and after of the parade through the decades . . ."
—This Week in New York

"Independent photographer Matt Harnick has contributed over 100 wonderful pictures to the book, complementing those from The Macy's Archives. 'Shooting these photos has been a labor of love,' Harnick said."
—Broadway World