Only in New York (Hardcover) 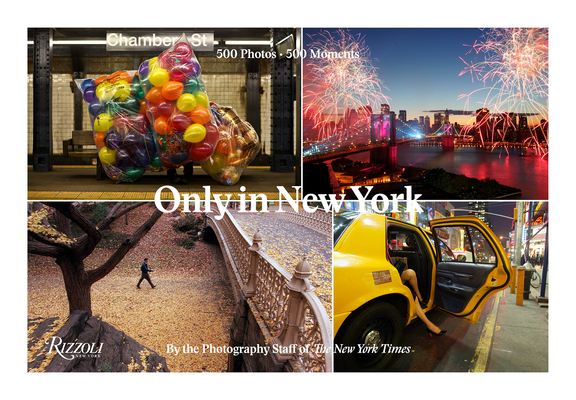 By The Photography Staff of the NY Times, David W. Dunlap (Introduction by)
$39.95
Usually Ships in 1-5 Days

Curated from hundreds of thousands of photos from The New York Times' archives Only in New York brings together the most memorable, poignant, and historic images of the Big Apple. This beautiful gift book celebrates New York in a way that will be treasured by native New Yorkers and tourists alike.

The New York Times is the world's foremost news organization, but it is very much a hometown paper, too. Since the inception of the camera, Times photographers have captured every newsworthy event--and many of the most iconic and intimate moments--that together document the very spirit and essence of New York City.

These 500 photos are selected and paired in clever, humorous, and poignant diptychs that bring the city to life as you could only see in NYC--from Broadway to Yankee Stadium, nightlife to street life, skyscrapers to subways. And since the turn of the last century, NY Times photographers have been visually recording the vast, and vastly interesting and entertaining, mix of people, places, and institutions that provide New York with its reputation as the city that occasionally dozes but never closes. This collection of their work spans more than a century, providing a vivid chronicle of metropolitan life at its most vibrant. Most of all, of course, there are the people and the neighborhoods they inhabit. Through the work of such celebrated New York Times photographers as Damon Winter, Neal Boenzi, Fred R. Conrad, Ruth Fremson, Vincent Laforet, Michelle Agins, Todd Heisler, Chang W. Lee, Barton Silverman, Sara Krulwich, Michelle Agins, Tyler Hicks, and many more, the spirit of the city is captured in this extraordinary book. Their ability to capture the familiar in original ways, and the seldom-seen in surprising ones, gives this book the look and feel of a true original.
Only in New York is a celebration of New York City and its people--and is sure to be treasured by native New Yorkers, tourists, and anyone who aspires to "make it there."

The New York Times is a daily newspaper published in New York City and distributed internationally. Founded in 1851, the newspaper has won 95 Pulitzer prizes, more than any other newspaper.

David W. Dunlap has covered New York City's infrastructure, architecture, engineering, landmarks, public spaces, and transportation for The New York Times since 1981. His reporting since 2003 has concentrated on the redevelopment of the World Trade Center. He also serves as the keeper of Times history. Dunlap's books include Building Provincetown (2015) and From Abyssinian to Zion (2004).

“2019 Holiday Gift Guide Selection: [This] picture-perfect book… [is] for anyone who lives, has lived, or wants to live in the great metropolis."
— Publishers Weekly

"[This is] what happens when you turn a bunch of talented [New York Times] staff photographers loose in a city as visually cacophonous as New York. They take liberties. They don’t listen to reason. You send them to shoot a City Council news conference in Woodside, Queens, and they come back with three teenagers on a crumbly stoop, drinking Cokes out of long-necked bottles, or a plastic bag stranded in a tree. Who asked for that?

Yet that’s New York, isn’t it? It’s the stuff you’re too busy to notice, or you can’t get to because you can’t be everywhere. It’s what idle hands do when they happen to belong to Pulitzer Prize-winning photographers and there’s a camera on them and nothing else to do. Did you see the reflection of that neon sign in the flooded pothole? Click. Click click click.

If you licked these pictures they would taste like New York. Which is why you don’t lick them.

Five hundred of these photos… are gathered in a new book called “Only in New York,” published by Rizzoli. They cover more than a century in the city, in sickness and in health. Mostly, they’re glimpses of the ordinary in a city that is anything but. Sometimes the moment is more than that."
— The New York Times Lens Blog


"Only in New York is a wonderful, quirky, poignant, funny and often profound look at New York City. The individual photographs are, of course, wonderful. After all, these are the photographers for The New York Times. The differences between photojournalism, street photography, and fine art are irrelevant here. Every image in the book is a solid piece of work on its own. Imagine the New York City Ballet performing The Nutcracker at Lincoln Center. Imagine the Naked Cowboy, children inside the crown of the Statue of Liberty, Mickey Mantle, Yogi Berra and Casey Stengel at Shea Stadium. Imagine King Kong. Whatever you have imagined, these photos will surprise you. Every one of them catches a moment.

But this book is more than that. It is intentionally a series of diptychs. That’s the thesis here: every photograph has a partner. And in these pairings there is an act of genius. In these pairings, in the distance between them or in ability to hold both images simultaneously in mind, in the contrasts or ironies or contradictions or confirmations, there is a truth about New York.

Only in New York is a history lesson, a sociological examination, an architectural appreciation, a tribute to sports stars and celebrities and ordinary people. At times it’s damn funny. At other times it’s heart wrenching. Its real power, though, is in what you feel when holding two things together.

In other words, Only in New York is a love story." — LensCulture