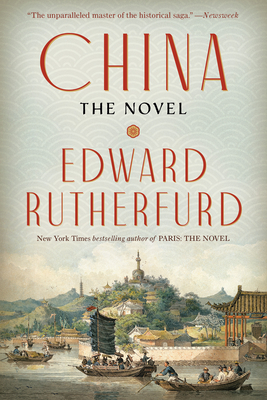 The “unparalleled master of the historical saga" (Newsweek) and internationally bestselling author of Paris and New York takes on an exhilarating new world with his trademark epic style in China: The Novel

In China: The Novel, Edward Rutherfurd brings his renowned talents to the Middle Kingdom, when the clash of East and West in the nineteenth century shattered the stability of the two-thousand-year-old empire. This epic tale chronicles the great struggle for power, from the Opium Wars that erupted in 1839 through the Taiping revolt, the British burning of the Summer Palace, the Boxer Rebellion, and the long rule of the Dragon Empress, culminating in the momentous revolution of 1911. We meet a young village wife struggling with rigid traditions, Manchu warriors, powerful eunuchs and concubines of the Forbidden City, rapacious English soldiers and earnest missionaries, savvy Chinese pirates, and sage philosophers. Rutherfurd brings to vivid life the ever-changing fortunes of Chinese, British, and American families as they negotiate the tides of history. A rich human drama as well as a deeply researched portrait that sets the stage for China’s role in the world today, China: The Novel is the enthralling story of a rising global power.

EDWARD RUTHERFURD is the internationally bestselling author of eight novels, including the New York Times bestsellers Paris, New York, London, The Princes of Ireland, and The Rebels of Ireland.

“Beginning with the First Opium War in 1839 and continuing through the present day, Rutherfurd tells a sweeping tale that brings to life a nation's history, traditions and the people who lived through it as if by magic.”
―Newsweek

“Bravo; this is a big, complex, and utterly involving portrait of 19th-century China.”
—The Times (London)

“It’s a bravura performance, fizzing with incident, excitement and energy.”
—The Daily Mail

“Edward Rutherfurd is known for massive historical novels usually set in cities like New York, Paris and London. They dig deeply into a specific place and he focuses on a certain period. . . . Rutherfurd’s thorough research shows again here in his descriptions of China and other places in Asia like Hong Kong and Macao. . . . Besides place, Rutherfurd also has thoroughly researched the many complexities of Chinese culture. . . . China can perhaps be placed in the same basket as the James Clavell novels of Tai-Pan and Noble House. . . . Worth sticking with all 760 pages”
—Asian Review of Books