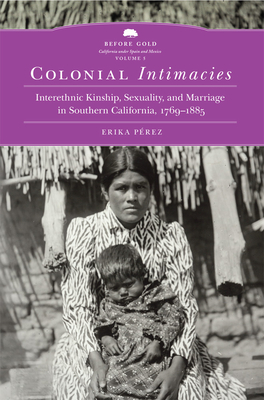 By Erika Perez
Email or call for price.
Usually Ships in 1-5 Days

"A gem of historical scholarship "--Vicki L. Ruiz, author of From Out of the Shadows: Mexican Women in Twentieth-Century America How do intimate relationships reveal, reflect, enable, or enact the social and political dimensions of imperial projects? In particular, how did colonial relations in late-eighteenth- and nineteenth-century southern California implicate sexuality, marriage, and kinship ties? In Colonial Intimacies, Erika P rez probes everyday relationships, encounters, and interactions to show how intimate choices about marriage, social networks, and godparentage were embedded in larger geopolitical concerns. Her work reveals, through the lens of social and familial intimacy, subtle tools of conquest and acts of resistance and accommodation among indigenous peoples, Spanish-Mexican settlers, Franciscan missionaries, and European and Anglo-American merchants. Concentrating on Catholic conversion, compadrazgo (baptismal sponsorship that often forged interethnic relations), and intermarriage, P rez examines the ways indigenous and Spanish-Mexican women helped shape communities and sustained their culture. She uncovers an unexpected fluidity in Californian society--shaped by race, class, gender, religion, and kinship--that persisted through the colony's transition from Spanish to American rule. Colonial Intimacies focuses on the offspring of interethnic couples and their strategies for coping with colonial rule and negotiating racial and cultural identities. P rez argues that these sons and daughters experienced conquest in different ways tied directly to their gender, and in turn faced different options in terms of marriage partners, economic status, social networks, and expressions of biculturality. Offering a more nuanced understanding of the colonial experience, Colonial Intimacies exposes the personal ties that undergirded imperial relationships in Spanish, Mexican, and early American California.