"They're Bankrupting Us!": And 20 Other Myths about Unions (Myths Made in America) (Paperback) 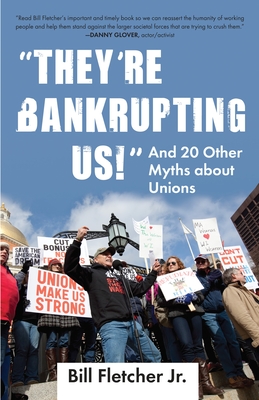 From Wisconsin to Washington, DC, the claims are made: unions are responsible for budget deficits, and their members are overpaid and enjoy cushy benefits. The only way to save the American economy, pundits claim, is to weaken the labor movement, strip workers of collective bargaining rights, and champion private industry. In "They're Bankrupting Us!": And 20 Other Myths about Unions, labor leader Bill Fletcher Jr. makes sense of this debate as he unpacks the twenty-one myths most often cited by anti-union propagandists. Drawing on his experiences as a longtime labor activist and organizer, Fletcher traces the historical roots of these myths and provides an honest assessment of the missteps of the labor movement. He reveals many of labor's significant contributions, such as establishing the forty-hour work week and minimum wage, guaranteeing safe workplaces, and fighting for equity within the workforce. This timely, accessible, "warts and all" book argues, ultimately, that unions are necessary for democracy and ensure economic and social justice for all people.

Bill Fletcher Jr. is a long-time racial-justice, labor, and international activist, scholar, and author.  He has been involved in the labor movement for decades, and is a widely known speaker and writer in print and on radio, television, and the Web. He has served in leadership positions with many prominent union and labor organizations, including the AFL-CIO and the Service Employees International Union. Fletcher is currently the director of field services for the American Federation of Government Employees.

"Coming from a union family helped shape who I am today. Unions have been critical for African Americans, and for all working people, and are essential for social justice. Read Bill Fletcher's important and timely book so we can reassert the humanity of working people and help them stand against the larger societal forces that are trying to crush them.”—Danny Glover, actor/activist

“As someone who has written about the daily lives and struggles of working people I am constantly impressed and enlightened by Bill Fletcher's work. In “They’re Bankrupting Us!” he answers the question of why unions are so essential—not just for economic uplift, but for democracy itself. Fletcher is one of our leading labor intellectuals, and once again, he has the last word on a subject of central importance to all Americans.”—Barbara Ehrenreich

“It’s amazing how much nonsense about unions is believed, and how little is really known about their purpose and proud history. Bill Fletcher sets the record straight, and he tells us a thrilling story while doing it. A thriving union movement is crucial to the well-being of working men and women and to the overall health of our democratic way of life. This book – better than any other I’ve read – explains why.”—Bob Herbert, Distinguished Senior Fellow at Demos and former Op-Ed columnist for The New York Times

"Isn't it curious that the loudest, most venomous voices against unions are the CEOs and Wall Streeters who profit by keeping America's working families down and unions out? In this powerful book, Bill Fletcher exposes their self-serving lies, and points out the obvious: unions work. Not only do they advance our economy, but also our democracy and our nation's historic pursuit of social justice."—Jim Hightower, author, radio commentator, public speaker, and editor of The Hightower Lowdown

"Even before I read Bill Fletcher's new book, I knew it was a 'must read.' Having read it now, my instincts have been confirmed. Bill Fletcher is a brilliant thinker in Ella Baker's tradition. He is an organizer extraordinaire who writes from thirty years experience in labor and freedom movements. “They’re Bankrupting Us!” speaks to a very broad audience about the diversity, complexity and vitality of the United States labor movement. And who better to tell that story and teach that lesson, than this amazing intellectual, committed activist and tireless movement teacher."—Barbara Ransby, Professor, University of Illinois at Chicago and author of Ella Baker and the Black Freedom Movement

"Bill Fletcher's new book is a must read for every worker in America. Full of surprising stories and useful facts, "They're Bankrupting Us!" uncovers everything we ever wanted to know about how unions work, and the true role that unions have played in shaping the nature of our work today."—Ai-jen Poo, Director, National Domestic Workers Alliance