Harnessing Grief:  A Mother's Quest for Meaning and Miracles (Hardcover) 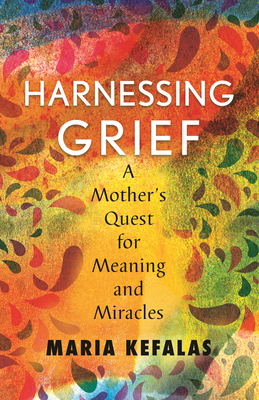 The inspiring story of a mother who took unimaginable tragedy and used her grief as a force to do good by transforming the lives of others.

When Maria Kefalas’s daughter Calliope was diagnosed with a degenerative, uncurable genetic disease, the last thing Maria expected to discover in herself was a superpower. She and her husband, Pat, were head over heels in love with their youngest daughter, whose spirit, dancing eyes, and appetite for life captured the best of each of them.

When they learned that Cal had MLD (metachromatic leukodystrophy), their world was shattered. But as she spent time listening to and learning from Cal, Maria developed the superpower of grief. It made her a fearless warrior for her daughter. And it gave her voice a bell-like clarity—poignant and funny all at once.

This superpower of grief also revealed a miracle—not the conventional sort that fuels the prayers of friends and strangers but a realization that, in order to save themselves, Maria and Pat would need to find a way to save others. And so, with their two older children, they set out to raise money so that they, in their son PJ’s words, could “find a cure for Cal’s disease.”

They had no way of knowing that a research team in Italy was closing in on an effective gene therapy for MLD. Though the therapy came too late to help Cal, this news would be the start of an unexpected journey that would introduce Maria and her family to world-famous scientists, brilliant doctors, biotech CEOs, a Hall of Fame NFL quarterback, and a wise nun, and it would also involve selling 50 thousand cupcakes. They would travel to the FDA, the NIH, and the halls of Congress in search of a cure that would never save their child. And their lives would become inextricably intertwined with the families of 13 children whose lives would be transformed by the biggest medical breakthrough in a generation.

A memoir about heartbreak that is also about joy, Harnessing Grief is both unsparing and generous. Steeped in love, it is a story about possibility.

Maria J. Kefalas is a professor at Saint Joseph’s University in Philadelphia and the author or coauthor of three books, including Hollowing Out the Middle, Working-Class Heroes, and Promises I Can Keep. Dr. Kefalas is also an advocate, a philanthropist, a blogger, and the cofounder of the Calliope Joy Foundation, which in 2015 helped fund the nation’s first Leukodystrophy Center of Excellence at the Children’s Hospital of Philadelphia and has supported families receiving treatment for MLD. She lives with her 3 children, Camille, PJ, and Cal, and her dog, Brody, outside Philadelphia. All royalties for the book will be donated to the Cal’s Cupcakes Foundation. Connect with her at mariakefalas.com and on Twitter (@ProfKefalas).

“A stunning, candid memoir. Those seeking a relatable story as they process grief and fans of personal memoir will appreciate this book equally for its honest, insightful storytelling.”
—Library Journal, Starred Review

“‘When the worst possible thing happens, you have nothing left to fear.’ Maria Kefalas illustrates, with fierce love and unexpected humor, the power of grief to transform and motivate a warrior mother to change the world. The Calliope Joy Foundation, named for the author’s daughter, is doing just that—and providing an invaluable resource within the pages of this book for others who seek to do the same.”
—Marianne Leone, author of Jesse and Ma Speaks Up

“Harnessing Grief is an inspiring, searingly honest account of a brave woman going through unspeakable loss—and gaining deep wisdom. Anyone who has suffered tragedy will identify with, and learn from, Maria Kefalas’s terrible, beautiful journey.”
—Martha Beck, PhD, author of Expecting Adam

“Kefalas somehow makes poetry and science, grief and hope, the same powerful language. She is fearless and unsparing about the facts that surround her toddler’s illness, and generous and valiant in describing her efforts to fund the research that might cure someone else’s child sometime in the future. Brave, defiant, she shares her journey through profound grief and rage to a faith in the miracle of love.”
—Meredith Hall, author of Without a Map

“A rapidly unfolding but gently paced story of personal transformation forged in grief. I could not put it down. In it, I recognize the stories of so many other families who have received a fatal diagnosis for their child and rise to be exactly the parents their child needs, with love and hope at the core. Maria finds the blessings in her story and inspires us to see bigger and deeper. She shows us that grief can be a superpower capable of changing the world and saving ourselves. And an added bonus is the captivating telling of the story of gene therapy, the golden promise for children affected by rare disease. I am grateful for this book.”
—Blyth Lord, founder, Courageous Parents Network, and rare disease mom