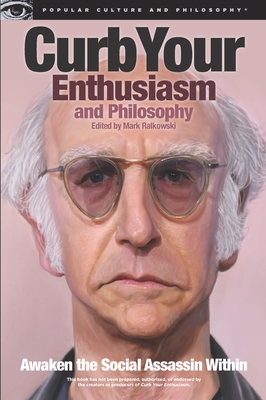 This is book number 69 in the Popular Culture & Philosophy series.

In a promotional video for the eighth season of HBO's Curb Your Enthusiasm, Larry David appears as Godzilla, walking through the streets of New York City, terrorizing everyone who sees him. People scream and run for their lives. Larry, meanwhile, has a quizzical look on his face and asks, "What, are you people nuts?"
What makes Larry a monster, and why doesn't he know that he's a monster? Curb Your Enthusiasm and Philosophy discusses several answers to these questions.
This book revolves around Curb-Larry, the character that the real Larry David plays on HBO's popular television series: his outlook on life, his unusual ways of interacting with people, his inability or unwillingness to conform to the world. Many of the chapters discuss ethical and existential issues, such as whether Larry is a "bad apple."
Larry doesn't ask questions about free will, or wonder whether the world outside our minds really exists because he's more like Socrates than Descartes. He tells bitter truths about how we live our lives. There's something heroic about Larry's independence from social conventions, and something tragic about his tendency to hurt people with his frankness. It's hard not to ask, should we curb our enthusiasm?

Mark Ralkowski is Assistant Professor of Philosophy and Honors at The George Washington University. He is author of Heidegger's Platonism (2009) and editor of Time and Death: Heidegger's Analysis of Finitude (2005).