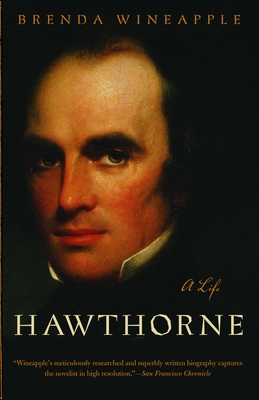 By Brenda Wineapple
$20.00
Email or call for price.

Handsome, reserved, almost frighteningly aloof until he was approached, then playful, cordial, Nathaniel Hawthorne was as mercurial and double-edged as his writing. “Deep as Dante,” Herman Melville said.

Hawthorne himself declared that he was not “one of those supremely hospitable people who serve up their own hearts, delicately fried, with brain sauce, as a tidbit” for the public. Yet those who knew him best often took the opposite position. “He always puts himself in his books,” said his sister-in-law Mary Mann, “he cannot help it.” His life, like his work, was extraordinary, a play of light and shadow.

In this major new biography of Hawthorne, the first in more than a decade, Brenda Wineapple, acclaimed biographer of Janet Flanner and Gertrude and Leo Stein (“Luminous”–Richard Howard), brings him brilliantly alive: an exquisite writer who shoveled dung in an attempt to found a new utopia at Brook Farm and then excoriated the community (or his attraction to it) in caustic satire; the confidant of Franklin Pierce, fourteenth president of the United States and arguably one of its worst; friend to Emerson and Thoreau and Melville who, unlike them, made fun of Abraham Lincoln and who, also unlike them, wrote compellingly of women, deeply identifying with them–he was the first major American writer to create erotic female characters. Those vibrant, independent women continue to haunt the imagination, although Hawthorne often punishes, humiliates, or kills them, as if exorcising that which enthralls.

Here is the man rooted in Salem, Massachusetts, of an old pre-Revolutionary family, reared partly in the wilds of western Maine, then schooled along with Longfellow at Bowdoin College. Here are his idyllic marriage to the youngest and prettiest of the Peabody sisters and his longtime friendships, including with Margaret Fuller, the notorious feminist writer and intellectual.

Here too is Hawthorne at the end of his days, revered as a genius, but considered as well to be an embarrassing puzzle by the Boston intelligentsia, isolated by fiercely held political loyalties that placed him against the Civil War and the currents of his time.

Brenda Wineapple navigates the high tides and chill undercurrents of Hawthorne’s fascinating life and work with clarity, nuance, and insight. The novels and tales, the incidental writings, travel notes and children’s books, letters and diaries reverberate in this biography, which both charts and protects the dark unknowable core that is quintessentially Hawthorne. In him, the quest of his generation for an authentically American voice bears disquieting fruit.

Brenda Wineapple is author of the award-winning Hawthorne: A Life; Genêt: A Biography of Janet Flanner, and Sister Brother: Gertrude and Leo Stein. She is also the editor of the Selected Poems of John Greenleaf Whittier in the American Poets Series (Library of America.) Her essays, articles and reviews have appeared in many publications, among them The American Scholar, The New York Times Book Review, Parnassus, Poetry, and The Nation. A Guggenheim fellow, a fellow of the American Council of Learned Societies, and twice of the National Endowment, she teaches in the MFA programs at Columbia University and The New School and lives in New York City.

“Clearly the best biography of Hawthorne; the Hawthorne for our time. Beautifully conceived and written, it conveys the full poignancy and complexity of Hawthorne’s life; it makes vivid the times and people and places — and what a rich array of people and events! A delight to read from start to end.”

“Brenda Wineapple’s Hawthorne is, quite literally, an electrifying life. The power and sweep of the writing galvanizes a subject frozen, by earlier biographies, into a series of stills. We understand, finally, a man and artist torn by every conflict of his time, adding a few of his own, a man both strange and strangely familiar. The great achievement of this stunning biography lies in the feat of restoring Hawthorne to the rich and roiling America of his own period, while revealing him, for the first time, as our contemporary.”

“With the possible exception of Herman Melville, no one has ever understood the grand tragic Shakespearian nature of Nathaniel Hawthorne's life and work as well as Brenda Wineapple. Her brilliant, powerful, nervy, unsettling and riveting book is authoritatively researched and beautifully written; it has itself the dark mesmeric power of a Hawthorne story. Wineapple's Hawthorne is an intensely private man, compounded of strange depths, mysterious failings, concealments, yearnings and unmistakable incandescent genius.”

“There is no justice for Hawthorne without the mercy which failed him in life and art. In Wineapple's new dispensation, all the man endured and the art achieved is revealed by loving scruple and, to awful circumstance, condolent response. No biographer since James, no critic since Lawrence has limned so unsparing and therefore so speaking a likeness of our first great fabulist, from which one returns to the works with enlightened wonder. More darkness, more light! Here both abound.”


“A fine biography...A sensitive reading of Hawthorne’s character...Wineapple makes generous use of a cache of family letters that detail the tangle and tussle of wills that Hawthorne had entered as son, brother, lover, and husband, all the while seeking the freedom of spirit to exercise his genius.”

“Meticulously researched and superbly written...captures the novelist in high resolution.”


“Richly detailed and nuanced; a model of literary biography and an illumination for students of Hawthorne’s work...A thoughtful and absorbing life.”


“A thoroughly engrossing story of a writer's life… written with novelistic grace and flow, with an eye to the telling detail and apt quotation.”


“Wineapple is a splendid stylist and a master of concision. She can capture an entire personality and life in a brief paragraph, … She can define a complex amatory relationship in a sentence…. Her eloquent hands bring Hawthorne vividly alive for us.”