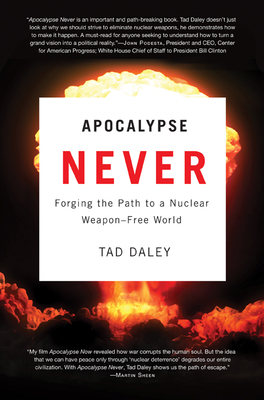 Apocalypse Never illuminates why we must abolish nuclear weapons, how we can, and what the world will look like after we do. The twenty-first century has ushered in a world at the atomic edge. The pop culture days of Dr. Strangelove have been replaced by the all-too-real single day of 24. Tad Daley has written a book for the general reader about this most crucial of contemporary challenges.

Apocalypse Never maintains that the abolition of nuclear weapons is both essential and achievable, and reveals in fine detail what we need to do--both governments and movements--to make it a reality. Daley insists that while global climate change poses the single greatest long-term peril to the human race, the nuclear challenge in its many incarnation--nuclear terror, nuclear accident, a nuclear crisis spinning out of control--poses the single most immediate peril. Daley launches a wholesale assault on the nuclear double standard--the notion that the United States permits itself thousands of these weapons but forbids others from aspiring to even one--insisting that it is militarily unnecessary, morally indefensible, and politically unsustainable. He conclusively repudiates the most frequent objection to nuclear disarmament, "the breakout scenario"--the possibility that after abolition someone might whip back the curtain, reveal a dozen nuclear warheads, and proceed to "rule the world."

On the wings of a brand new era in American history, Apocalypse Never makes the case that a comprehensive nuclear policy agenda from President Obama, one that fully integrates nonproliferation with disarmament, can both eliminate immediate nuclear dangers and set us irreversibly on the road to abolition. In jargon-free language, Daley explores the possible verification measures, enforcement mechanisms, and governance structures of a nuclear weapon-free world. Most importantly, he decisively argues that universal nuclear disarmament is something we can transform from a utopian fantasy into a concrete political goal.

Tad Daley, J.D., Ph.D., directs the Project on Abolishing War at the Center for War/Peace Studies in New York. He previously served as a speechwriter for Congressman Dennis Kucinich and the late Senator Alan Cranston, as a visiting scholar at UCLA, and as a policy analyst at the RAND Corporation. Visit his websites: www.daleyplanet.org and www.apocalypsenever.org.

"Apocalypse Never is a frightening book to read but impossible to put down. In clear, accessible prose, Tad Daley unblinkingly lays out the case, point by point, for why we must ultimately rid the world of nuclear weapons or else suffer the inevitable consequences of the end of civilization as we know it. Daley then takes on the task of showing how this seemingly Herculean task can be accomplished, even within our lifetimes. It is compelling and accurate in its assessments and one of the absolute best out there on why we simply cannot continue along the way it has been."

"If you have a nuclear addiction, Dr. Tad Daley has the cure. ... Two things distinguish this work ... Daley’s chatty style, which ... renders his book accessible to the general public ... (and) his prescription for reaching global zero, through his detailed description of the architecture of a nuclear weapon-free world founded on a legally binding treaty that would replace the NPT."

"Apocalypse Never explores the dangers of the Nuclear Age, argues that the only way to prevent future nuclear catastrophes is to eliminate the weapons, and provides a roadmap to achieve this goal … It presents a comprehensive overview of the possibilities of nuclear terrorism, accidental nuclear war, mismanagement of a nuclear crisis, and the intentional use of nuclear weapons … It suggests that the NPT should properly have been named the 'Nuclear Non-Proliferation and Elimination Treaty' … It (makes clear that this) is a life-or-death struggle between humans and the tools we have created … Daley's book provides the background and the vision for individuals to become informed and effective citizens of the Nuclear Age … The issue is far too important to be left only in the hands of our leaders."

"Probably the most unsettling book I've ever read."

"My film Apocalypse Now revealed how war corrupts the human soul. But the idea that we can have peace only through 'nuclear deterrence' degrades our entire civilization. With Apocalypse Never, Tad Daley shows us the path of escape."

"While spiritual progressives seek to end all war, a major step is to end the threat of nuclear war. Tad Daley shows us that this is actually within our grasp, and an imperative for the survival of our planet and life itself.”

"Tad Daley makes a compelling case for eliminating nuclear weapons now, before they are used intentionally by a terrorist group or accidentally by a nuclear-armed nation. The weight of the evidence supplied in Apocalypse Never leads to an inescapable conclusion: the fewer nuclear weapons there are, the safer we all will be. And it makes it clear that our ultimate security depends on getting rid of these terrible weapons once and for all.”

“Apocalypse Never is an important and path-breaking book. Tad Daley doesn’t just look at why we should strive to eliminate nuclear weapons, he demonstrates how to make it happen. This book is a must-read for anyone seeking to understand how to turn a grand vision into a political reality.”

"Tad Daley has performed a truly rare feat. He doesn't offer the same tired survey of Iran and North Korea and the contemporary nuclear landscape. Instead, he convinces the reader completely that the only possible solution to the threat of nuclear annihilation is the abolition of nuclear weapons. Moreover, he actually charts a course for how we might get from here to there. Mr. Daley is an elegant writer, and his wonderful first book will enable both experts and regular folks to see, breathe, and believe in the dawn of a nuclear weapon-free world."
— Daniel Ellsberg

"Tad Daley takes a penetrating look at the threat President Barack Obama calls 'the gravest danger to the American people,' and does so with clarity and integrity. Apocalypse Never details how the failed policies of the past have made the nuclear threat worse and how the only real solution is to move steadily towards eliminating the only weapons that can destroy the world. We would be wise to listen."
— Joseph Cirincione

“In plain, understandable prose, Apocalypse Never makes a compelling case that the continued existence of nuclear weapons, regardless of their ownership, can lead to catastrophic disasters. A must-read.”

"Few Americans know that more than forty years ago, in the Nuclear Non-Proliferation Treaty, our country committed to eliminate its entire nuclear arsenal. In Apocalypse Never, Tad Daley traces the tortured history of this promise—and charts a course toward at last fulfilling it.”
— Michael Douglas

"Apocalypse Never builds a compelling case for one of the most urgent causes of our time—the global abolition of nuclear weapons. Tad Daley writes with all the seriousness the subject requires, but refreshingly eschews the jargon too often applied by 'experts' that estranges those not conversant in the lingo."

"For those of us who think that freeing the planet from the specter of nuclear holocaust is the most important task before humankind, but also one that's nearly impossible to achieve, Tad Daley has drawn us a roadmap for the journey ahead. It demands no wild leaps of faith, no suspensions of disbelief. Mixing political sobriety with existential urgency and just plain damn good writing, Daley shows us the way."

"Finally, a book that explains in common sense language the process for bringing a nuclear weapon-free world from utopia to reality."
— Congressman Dennis Kucinich