Haiti and the Uses of America: Post-U.S. Occupation Promises (Paperback) 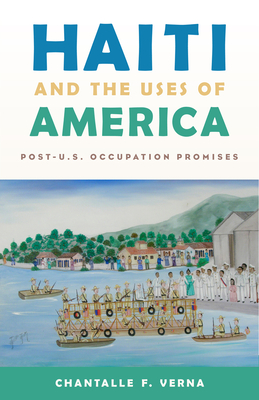 Contrary to popular notions, Haiti-U.S. relations have not only been about Haitian resistance to U.S. domination. In Haiti and the Uses of America, Chantalle F. Verna makes evident that there have been key moments of cooperation that contributed to nation-building in both countries.

In the years following the U.S. occupation of Haiti (1915-1934), Haitian politicians and professionals with a cosmopolitan outlook shaped a new era in Haiti-U.S. diplomacy. Their efforts, Verna shows, helped favorable ideas about the United States, once held by a small segment of Haitian society, circulate more widely. In this way, Haitians contributed to and capitalized upon the spread of internationalism in the Americas and the larger world.

CHANTALLE F. VERNA is an associate professor of history and international relations at Florida International University in Miami. She is a coeditor of the forthcoming book, The Haiti Reader: History, Culture, and Politics.

"Tracing Haitian post-occupation engagement with the United States, Verna rejects a narrow binary interpretation and convincingly demonstrates the importance of a thoroughly informed, nuanced lens in any analysis of Haiti–U.S. relations."

"This groundbreaking, deeply researched, and richly rewarding study illuminates how Haitians were key agents of inter-American connection and collaboration during the mid-twentieth century. Chantalle F. Verna rethinks Haiti's relation to the United States at that time by asking complex questions and reaching nuanced insights that seem just as relevant and important with reference to today."
— Kate Ramsey

"In keeping with the careful nuance she employs, Verna weaves analysis of race and class throughout the book, yet without allowing either theme to eclipse other concerns and motivations. The work is especially well written and easy to navigate."
— American Historical Review

"This text is already an important work in multiple historiographies. Haiti and the Uses of America will serve as the foundation for such future scholarship on cultural and diplomatic interactions in Haitian foreign policy in the twentieth and twenty-first centuries as well as the multifaceted relationship between Haiti, the United States, and international development."
— H-Net

"The insights of Haiti and the Uses of America raise new questions about Haiti in the past and present....In connecting the U.S. occupation to the U.N. development projects that came later, Verna provides an unbroken line from the early twentieth-century occupation to the present one. What would we learn if scholars were more open to the ambiguities of the first occupation and more receptive to the anti-occupation voices of the present? After reading Verna, these become impossible to ignore."
— New West Indian Guide

"[A] meaningful new book...[This] well-researched and nuanced book deepens the knowledge of scholars of Haiti and Caribbean intellectual, social, and economic historians interested in local and national challenges that impeded the prosperity of Haiti's most vulnerable citizens."
— Journal of Haitian Studies