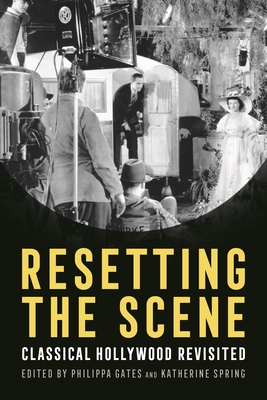 More than a century after its emergence, classical Hollywood cinema remains popular today with cinephiles and scholars alike. Resetting the Scene: Classical Hollywood Revisited, edited by Philippa Gates and Katherine Spring, showcases cutting-edge work by renowned researchers of Hollywood filmmaking of the studio era and proposes new directions for classical Hollywood studies in the twenty-first century.

Resetting the Scene includes twenty-six accessible chapters and an extensive bibliography. In Part 1, Katherine Spring's introduction and David Bordwell's chapter reflect on the newest methods, technological resources, and archival discoveries that have galvanized recent research of studio filmmaking. Part 2 brings together close analyses of film style both visual and sonic with case studies of shot composition, cinematography, and film music. Part 3 offers new approaches to genre, specifically the film musical, the backstudio picture, and the B-film. Part 4 focuses on industry operations, including the origins of Hollywood, cross-promotion, production planning, and talent management. Part 5 offers novel perspectives on the representation of race, in regard to censorship, musicals, film noir, and science fiction. Part 6 illuminates forgotten histories of women's labor in terms of wartime propaganda, below-the-line work, and the evolution of star persona. Part 7 explores the demise of the studio system but also the endurance of classical norms in auteur cinema and screenwriting in the post-classical era. Part 8 highlights new methods for studying Hollywood cinema, including digital resources as tools for writing history and analyzing films, and the intersection of film studies with emergent fields like media industry studies. Intended for scholars and students of Hollywood film history, Resetting the Scene intersects with numerous fields consonant with film studies, including star studies, media industry studies, and critical race theory.