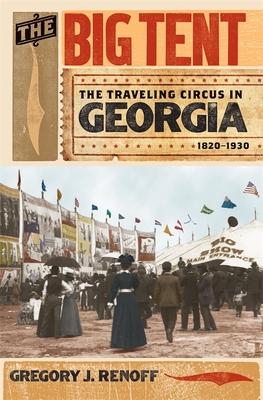 By Gregory J. Renoff
Email or call for price

For many people, the circus, with its clowns, exotic beasts, and other colorful iconography, is lighthearted entertainment. Yet for Greg Renoff and other scholars, the circus and its social context also provide a richly suggestive repository of changing attitudes about race, class, religion, and consumerism. In the South during the nineteenth and early twentieth centuries, traveling circuses fostered social spaces where people of all classes and colors could grapple with the region's upheavals.

The Big Tent relates the circus experience from the perspectives of its diverse audiences, telling what locals might have seen and done while the show was in town. Renoff digs deeper, too. He points out, for instance, that the performances of these itinerant outfits in Jim Crow-era Georgia allowed boisterous, unrestrained interaction between blacks and whites on show lots and on city streets on Circus Day. Renoff also looks at encounters between southerners and the largely northern population of circus owners, promoters, and performers, who were frequently accused of inciting public disorder and purveying lowbrow prurience, in part due to residual anger over the Civil War. By recasting itself as a showcase of athleticism, equestrian skill, and God's wondrous animal creations, the circus appeased community leaders, many of whose businesses prospered during circus visits. Ranging across a changing social, cultural, and economic landscape, The Big Tent tells a new history of what happened when the circus came to town, from the time it traveled by wagon and river barge through its heyday during the railroad era and into its initial decline in the age of the automobile and mass consumerism.

GREGORY J. RENOFF is an assistant professor of history at Drury University.