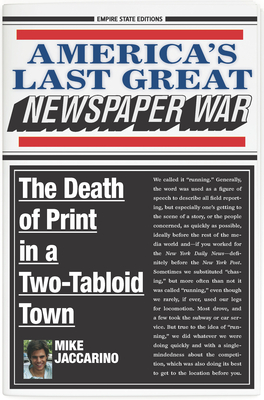 ALSO AVAILABLE AS AN AUDIOBOOK A from-the-trenches view of New York Daily News and New York Post runners and photographers as they stop at nothing to break the story and squash their tabloid arch-rivals. When author Mike Jaccarino was offered a job at the Daily News in 2006, he was asked a single question: "Kid, what are you going to do to help us beat the Post?" That was the year things went sideways at the News, when the New York Post surpassed its nemesis in circulation for the first time in the history of both papers. Tasked with one job--crush the Post--Jaccarino here provides the behind-the-scenes story of how the runners and shooters on both sides would do anything and everything to get the scoop before their opponents. The New York Daily News and the New York Post have long been the Hatfields and McCoys of American media: two warring tabloids in a town big enough for only one of them. As digital news rendered print journalism obsolete, the fight to survive in NYC became an epic, Darwinian battle. In America's Last Great Newspaper War, Jaccarino exposes the untold story of this tabloid death match of such ferocity and obsession its like has not occurred since Pulitzer- Hearst. Told through the eyes of hungry "runners" (field reporters) and "shooters" (photographers) who would employ phony police lights to overcome traffic, Mike Jaccarino's memoir unmasks the do-whatever-it-takes era of reporting--where the ends justified the means and nothing was off-limits. His no-holds-barred account describes sneaking into hospitals, months-long stakeouts, infiltrating John Gotti's crypt, bidding wars for scoops, high-speed car chases with Hillary Clinton, O.J. Simpson, and the baby mama of a philandering congressman--all to get that coveted front-page story. Today, few runners and shooters remain on the street. Their age and exploits are as bygone as the News-Post war and American newspapers, generally. Where armies once battled, often no one is covering the story at all. Funding for this book was provided by: Furthermore: a program of the J. M. Kaplan Fund

Mike Jaccarino is a New York City-based journalist whose work has appeared in the New York Daily News, FoxNews.com, The Press of Atlantic City, The Jersey Journal of Jersey City, N.J., The Asbury Park Press, and The Week magazine.