For Such a Time as This: Hope and Forgiveness After the Charleston Massacre (Paperback) 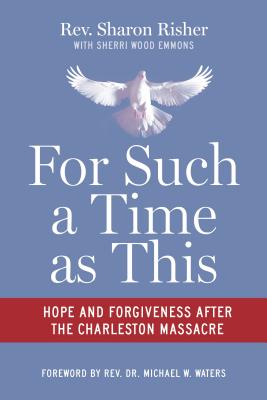 How can you forgive the unforgiveable The instant her phone rang, Reverend Sharon Risher sensed something was horribly wrong. Something had happened at Emanuel AME Church, the church of her youth in Charleston, South Carolina, and she knew her mother was likely in the church at Bible study. Even before she heard the news, her chaplain's instinct told her the awful truth: her mother was dead, along with two cousins. What she couldn't imagine was that they had been murdered by a white supremacist. Plunged into the depths of mourning and anger and shock, Sharon could have wallowed in the pain. Instead, she chose the path of forgiveness and hope - eventually forgiving the convicted killer for his crime.
In this powerful memoir of faith, family, and loss, Sharon begins the story with her mother, Ethel Lee Lance, seeking refuge in the church from poverty and scorn and raising her family despite unfathomable violence that rattled Sharon to her core years later; how Sharon overcame her own struggles and answered the call to ministry; and how, in the loss of her dear mother, Sharon has become a nationally known speaker as she shares her raw, riveting, story of losing loved ones to gun violence and racism.
Sharon's story is a story of transformation: How an anonymous hospital chaplain was thrust into the national spotlight, joining survivors of other gun-related horrors as reluctant speakers for a heartbroken social-justice movement. As she recounts her grief and the struggle to forgive the killer, Risher learns to trust God's timing and lean on God's loving presence to guide her steps. Where her faith journey leads her is surprising and inspiring, as she finds a renewed purpose to her life in the company of other survivors.
Risher has been interviewed by Time Magazine, Marie-Claire, Essence, Guardian-BCC Radio, CNN, and other media sources. She regularly shares her story on American college campuses and racial-reconciliation events. "To Forgive a Killer," her essay as told to Abigail Pesta published in Notre Dame Magazine, won the 2018 Front Page Award for Essay published in a Magazine, awarded by the Newswomen's Club of New York.

Rev. Sharon Washington Risher was born and raised in Charleston, South Carolina. She heard the call to ministry in 2002 and left North Carolina to attend Austin Presbyterian Theological Seminary, where she earned her Masters of Divinity degree. Sharon served as Staff Chaplain and Trauma Specialist at Parkland Hospital and as Associate Pastor for Congregational Care at Rice Chapel AME Church in Dallas, TX. On June 17th, 2015, a horrific tragedy happened: Sharon's dear mother, Mrs. Ethel Lee Lance, was killed in Charleston at the Mother Emanuel African Methodist Episcopal Church, along with two cousins, a childhood friend, and the others murdered in that massacre. Since that time, Sharon has been an advocate for revising gun laws, and is a spokesperson for the grassroots advocacy groups Everytown Survivor Network and Moms Demand Action for Gun Sense in America. She has appeared on CNN, BBC Radio, Good Morning America, and CBS and has been interviewed or written for Time, Marie-Claire, Essence, Texas Monthly, Vogue, and VOX. Her advocacy work brought her to the White House, where she witnessed President Barak Obama sign executive orders pertaining to new gun laws. Sharon has shared her story of loss, forgiveness, racism and gun law reform with audiences across the United States. Sharon has two grown children and enjoys reading, cross-stitching, growing tropical plants, listening to a variety of music and being a mother to her fur dog-child, Puff-Daddy.