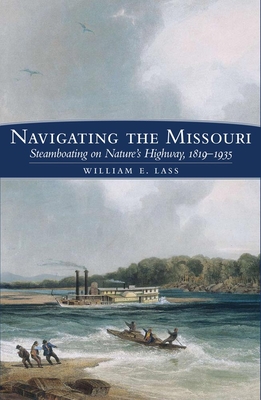 By William E. Lass
Email or call for price.

The complete history of steamboating on the Missouri River

Forming the most important river corridor in the trans-Mississippi West, the Missouri and its navigable tributaries were instrumental in opening the continent--but it took the steamboat to make that possible. The flat-bottomed vessel was the technological marvel of its day and provided access to the West before the railroads' arrival, encouraging settlement and fueling economic growth for decades.

The complete and colorful saga of steamboating on the Missouri River is recounted, from its 1819 inception to the removal of the last commercial steamer in 1935. William E. Lass has crafted an engagingly written account that provides a panorama of transportation into and through the West--a story of the fur trade, of Indian relations, and of Euro-American settlement and development.

Navigating the Missouri tells of migration and commerce on the Santa Fe Trail, the Platte River Road, and routes to the Montana gold mines. It explores the economic and political milieu of steamboating while savoring the rich social history of life on the Missouri, including the boat captains, who were the heroes of the river. Here too are insights into the operation of the steamboats, and Lass explains how the steamboat companies evolved, exploiting new opportunities and adjusting to change.

Because steamboating touched so many dimensions of western expansion, Navigating the Missouri is an essential resource--a cornerstone study that complements nearly every other history of the American West.