Brilliant Beacons: A History of the American Lighthouse (Hardcover) 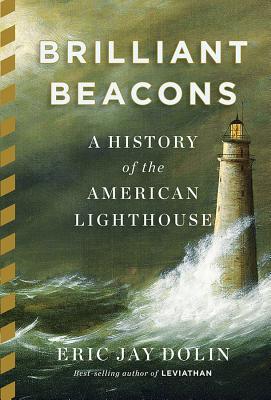 In a work rich in maritime lore and brimming with original historical detail, Eric Jay Dolin, the best-selling author of Leviathan, presents an epic history of American lighthouses, telling the story of America through the prism of its beloved coastal sentinels.

Set against the backdrop of an expanding nation, Brilliant Beacons traces the evolution of America's lighthouse system from its earliest days, highlighting the political, military, and technological battles fought to illuminate the nation's hardscrabble coastlines. Beginning with "Boston Light," America’s first lighthouse, Dolin shows how the story of America, from colony to regional backwater, to fledging nation, and eventually to global industrial power, can be illustrated through its lighthouses.

Even in the colonial era, the question of how best to solve the collective problem of lighting our ports, reefs, and coasts through a patchwork of private interests and independent localities telegraphed the great American debate over federalism and the role of a centralized government. As the nation expanded, throughout the nineteenth and early twentieth centuries, so too did the coastlines in need of illumination, from New England to the Gulf of Mexico, the Great Lakes, the Pacific Coast all the way to Alaska. In Dolin's hands we see how each of these beacons tell its own story of political squabbling, technological advancement, engineering marvel, and individual derring-do.

In rollicking detail, Dolin treats readers to a memorable cast of characters, from the penny-pinching Treasury official Stephen Pleasonton, who hamstrung the country's efforts to adopt the revolutionary Fresnel lens, to the indomitable Katherine Walker, who presided so heroically over New York Harbor as keeper at Robbins Reef Lighthouse that she was hailed as a genuine New York City folk hero upon her death in 1931. He also animates American military history from the Revolution to the Civil War and presents tales both humorous and harrowing of soldiers, saboteurs, Civil War battles, ruthless egg collectors, and, most important, the lighthouse keepers themselves, men and women who often performed astonishing acts of heroism in carrying out their duties.

In the modern world of GPS and satellite-monitored shipping lanes, Brilliant Beacons forms a poignant elegy for the bygone days of the lighthouse, a symbol of American ingenuity that served as both a warning and a sign of hope for generations of mariners; and it also shows how these sentinels have endured, retaining their vibrancy to the present day. Containing over 150 photographs and illustrations, Brilliant Beacons vividly reframes America's history.

Eric Jay Dolin is the author of fourteen books. His most recent is A Furious Sky: The Five-Hundred-Year History of America's Hurricanes, which received a number of accolades, including being chosen by the Washington Post as one of 50 Notable Works of Nonfiction in 2020, by Kirkus Reviews as one of the Best Nonfiction Books of 2020 (in addition to being a Kirkus Prize finalist), by the Library Journal and Booklist as one of the Best Science & Technology Books of 2020, and by the New York Times Book Review as an "Editor's Choice." Other books include Leviathan: The History of Whaling in America, which was chosen as one of the Best Nonfiction Books of 2007 by the Los Angeles Times and the Boston Globe, and also won the 2007 John Lyman Award for U.S. Maritime History; and Black Flags, Blue Waters: The Epic History of America's Most Notorious Pirates, which was chosen as a "Must-Read" book for 2019 by the Massachusetts Center for the Book, and was a finalist for the 2019 Julia Ward Howe Award given by the Boston Author's Club. A graduate of Brown, Yale, and MIT, where he received his Ph.D. in environmental policy, Dolin lives in Marblehead, Massachusetts, with his family.

A marvelously interesting and entertaining narrative…A skillful dramatist of such events, Dolin is as good a portraitist of characters who built and kept lighthouses…Dolin moves forward to chronicle the construction of numerous impressive towers in wildly windswept, picturesque settings. These classic lighthouses, featured in the book’s many illustrations, and the keepers’ tales attached to them exert an ineffably romantic attraction richly conveyed in Dolin’s admirable presentation.
— Booklist (starred review)

The author of other masterly works on key aspects of American history and growth (Fur, Fortune, and Empire: The Epic History of the Fur Trade in America, 2010, etc.), Dolin here presents a thoughtful, straightforward chronicle of the American lighthouse, from the earliest, completed in 1716 at Little Brewster, in Boston Harbor, as a harbinger of burgeoning Colonial maritime growth, to the death of the last civilian keeper—at the Coney Island Lighthouse—in 2003…A delightful journey with excellent sketches, renderings, and resources for museums and organizations.

Here we have a full-bodied and fabulous history of one of America's most scenic and formative icons, the coastal beacons that defined a young nation’s economic drive and determination to own the seas. Readers familiar with the irresistible narratives Dolin delivered in Leviathan or Fur, Fortune, and Empire can be confident that he has now done the same for the riveting history of America's lighthouses.

— Rinker Buck, author of Flight of Passage and The Oregon Trail

Eric Jay Dolin has crafted a master work of research and storytelling. Brilliant Beacons is a fascinating ride through the rich history of lighthouses as strategic prizes in war, sources of technological innovation, and inspiration for architectural ingenuity that combines grace and strength. This is a book for anyone who has gazed with awe upon the sea.

Eric Jay Dolin looks beyond the postcard romance of lighthouses to reveal a vibrant and vital history. From shipwrecks and wartime raids to poetry, bird migration, and the physics of refraction, Brilliant Beacons is a fascinating, page-turning, and, yes, illuminating read.

— Thor Hanson, author of The Triumph of Seeds and Feathers

Brilliant Beacons is the best history of American lighthouses ever written.

What better place to watch the United States taking shape than from its lighthouses? And what better author to take us to them than Eric Jay Dolin? With his usual narrative flair and wonderfully entertaining writing style, Dolin sheds all sorts of new light on American history.
— Toby Lester, author of The Fourth Part of the World and Da Vinci’s Ghost

This meticulously researched and fascinating book isn’t just for maritime history buffs but for all of us who appreciate little-known tales of days gone by.
— Michael Tougias, author of A Storm Too Soon and coauthor of The Finest Hours

No other book on the topic is as detailed and well written. Brilliant Beacons should be required reading for anyone interested in American history.