Woolly and Me (Hardcover) 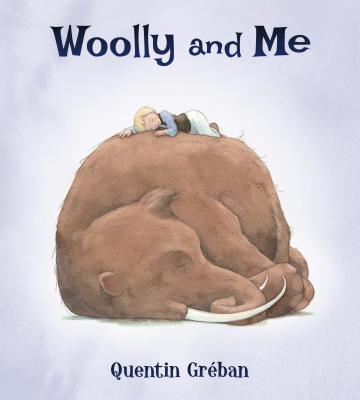 Inviting illustrations and spare text tell a gentle story of a child’s love for their favorite companion. Everyone should be so lucky to have someone like Woolly in their lives!

With whimsical illustrations, a child describes the many ways in which her woolly mammoth is one of the world’s best pets, accompanying her everywhere and sharing her daily activities with keen enthusiasm and loving gentleness.

And when her mammoth gets a little frightened—on a roller coaster ride or in her dark bedroom at night—our brave narrator comforts her pet and bucks up his courage. On the last page of this warm and reassuring picture book, we see at last that Woolly is a stuffed animal—leading us to ask, who has been comforting whom?

QUENTIN GRÉBAN (Brussels, Belgium) studied illustration at the Saint Luc Institute in Brussels. Quentin has published more than 40 children’s books for French, Belgian, German, and Greek publishing houses since 1999. His books have been sold into Germany, Denmark, Hungary, England, Canada, Greece, Korea, the United States, and other countries. He received the Saint-Exupéry award in 2000 for Les contes de l’Alphabet, and his work was selected in 1999, 2001, and 2008 for the Annual of the Bologna Children’s Bookfair. Woolly and Me has been published in 11 languages.

A little girl and her devoted woolly mammoth go about their day in this charming tale of friendship, imagination, and enjoying life’s simple pleasures. They shop for groceries, visit the fair, practice ballet, and paint pictures together. This is a simple narrative with understated humor, in which soft illustrations lend a vintage feel to the entertaining challenges of fitting Woolly into a bathtub, fixing his shaggy hair, or sharing a pasta dinner with a rather large, tusked mammal.
— PALLAS GATES MCCORQUODALE

The closing revelation that Woolly is a stuffed toy (“Some people might not think he’s real...”) only goes to show how large a presence, sometimes literally, a treasured stuffed pal can have in a child’s imaginative life.

Belgian artist Gréban uses an imaginary woolly mammoth to visit the trials and joys of an oversize pet. A small blonde child narrates the pair's daily tasks and special activities like ballet class and a fair. Despite poor spaghetti management, Woolly's assets include that he is already toilet trained and is not afraid of monsters as long as he's in the top bunk. The witty and engaging paintings capture each absurdity, adorning the simple text with spirit. Woolly totes grocery bags and the girl with his tusks, and uses hair curlers during grooming.

VERDICT This gambol's only drawback is that it has numerous forerunners.