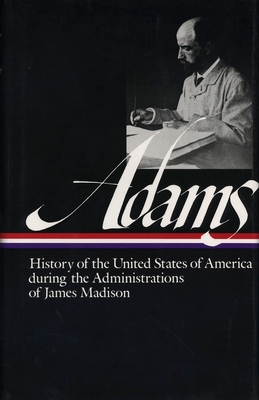 This is book number 3 in the Library of America Henry Adams Edition series.

This monumental work, the second of two Library of America volumes, culminated Henry Adams’s lifelong fascination with the American past. Writing at the height of his powers, Adams understood the true subject as the consolidation of the American nation and character, and his treatment has never been surpassed.

Covering the eight years spanning the presidency of James Madison, this volume chronicles “Mr. Madison’s War”—the most bungled war in American history. The President and Congress delay while the United States is bullied and insulted by both England and France; then they plunge the country into the War of 1812 without providing the troops, monies, or fleets to wage it. The incompetence of the commanders leads to a series of disasters—including the burning of the White House and Capitol while Madison and his cabinet, fleeing from an invading army, watch from the nearby hills of Maryland and Virginia.

The war has its heroes, too: William Henry Harrison at Tippecanoe and Andrew Jackson at New Orleans, Commodores Perry and Decatur and the officers and crew of the Constitution. As Adams tells it, though, disgrace, is averted by other means: the ineptitude of the British, the skill of the American artillerymen and privateers, and the diplomatic brilliance of Albert Gallatin and John Quincy Adams, who negotiated the peace treaty at Ghent. The history, full of reversals and paradoxes, ends with the largest irony of all: the United States, the apparent loser of the war, emerges as a great new world power destined to eclipse its European rivals.

Born in 1838 into one of the oldest and most distinguished families in Boston, a family which had produced two American presidents, Henry Adams had the opportunity to pursue a wide-ranging variety of intellectual interests during the course of his life. Functioning both in the world of practical men and afffairs (as a journalist and an assistant to his father, who was an American diplomat in Washinton and London), and in the world of ideas (as a prolific writer, the editor of the prestigious North American Review, and a professor of medieval, european, and American history at Harvard), Adams was one of the few men of his era who attempted to understand art, thought, culture, and history as one complex force field of interacting energies. His two masterworks in this dazzling effort are Mont Saint Michel and Chartres and The Education of Henry Adams, published one after the other in 1904 and 1907. Taken together they may be read as Adams' spiritual autobiography—two monumental volumes in which he attempts to bring together into a vast synthesis all of his knowledge of politics, economics, psychology, science, philosophy, art, and literature in order to attempt to understand the individual's place in history and society. They constitute one of the greatest historical and philosophical meditations on the human condition in all of literature.