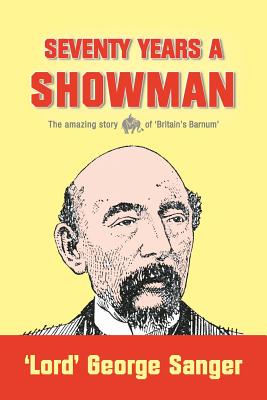 Dancing off the page like real-life Dickens, this legendary autobiography of Victorian circus pioneer 'Lord' George Sanger is dar, fun and irresistible. As befits a man who lived by his wits, he tells a great story - letting us enter the wild world of 19th century peep-shows, menageries, freaks and travelling fairs.

Written in 1910, this gem of Victorian life has been strangely neglected. This new edition adds gorgeous illustrations - many from Dickens collaborator George Cruikshank - plus a useful introduction and index. It also includes a famous commentary on the book by Wind in the Willows writer Kenneth Grahame.

While most people today know of American showman P. T. Barnum, few, even in Britain, have heard of 'Lord' George Sanger. That's odd, for Sanger was then as famous in Europe. He was also the American's equal in skill, pluck and cheek. But while Barnum's story is often sanitised, this book is as rooted in darkness as spectacle.

After opening his first circus in the early 1850s, Sanger's rise was relentless. By 1871 he had taken over Britain's largest permanent circus, Astley's in London, while also running eleven other shows across the country. One show alone gathered on stage 700 actors,13 elephants, 9 camels, and 52 horses, plus ostriches, emus, pelicans, deer, kangaroos, buffaloes, bulls and, at the centre of it all, two African lions.

But it's his early years that most enthrall. Born in 1827, George grew up in a caravan as his family moved every few days to perform at a different fair. By the age of six, he was declaiming recent murders to spellbound audiences.

Circus life was rough. When a fight broke out between rival shows on the road, Even the freaks took part. The fat man made for the living skeleton with a door-hook; the living skeleton battered at the fat man with a peg mallet. One typically picaresque scene finds performers uniting to tackle a factory fire near Stepney Fair. Amid the flying sparks ... could be seen clowns, knights in armour, Indian chiefs, jugglers in tights and spangles, rope-walkers in fleshings.

Sanger voyages brightly through the classes and geographies of his time. One minute he's bare-knuckle fighting in an East End pub, the next entertaining toffs on the Isle of Wight. He claimed to have played to every community in Britain of more than 100 inhabitants. And whether he was recruiting a fake tribe of red Indians from Liverpool slums, dodging the fury of a Chartist riot or chatting with Queen Victoria about elephants, Sanger remained resolutely the same man.

And what a man that was. Clad in glossy top hat, frock coat and boots, he was a spritely showman who prized action over paperwork.

'Lord' George gleefully shares his trade secrets. For his Shoal of Trained Fish in their Exhibition of a Naval Engagement, he got goldfish to steer model boats armed with small explosives. He presented an oyster who appeared to smoke, contentedly. There were fortune-telling ponies. The Pig-faced Lady was actually a bear.

Animals were central to his life. Sanger teaches how to train a pig, donkey, lion or tiger. Never lose your temper with an animal, he writes. You can without any unkind treatment teach him to do anything you want him to do.

He was also one of Victorian England's leading entrepreneurs, building one of the world's best known names in circus - and fighting hard against American invaders like Buffalo Bill Cody and Barnum & Bailey.

This master of hanky-panky (meaning conjuring and patter, not today's more smutty connotation) wrote one of the most jaw-dropping accounts of Victorian England. This new edition of Seventy Years a Showman enables you to enjoy this tale more fully than ever before.