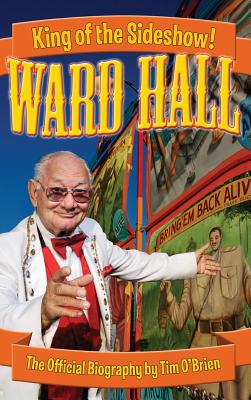 Ward Hall ran across town and joined the circus for a part time gig in 1944 when he was a "kid" living in Colorado. A year later, as a 15 year old 10th grade dropout, he ran away for good, joining the Dailey Bros. Circus. He never looked back. By 16 he was performing in a sideshow and by age 21, he owned a sideshow Today, 70 years later and countless circus and side show, vaudeville and burlesque house performances under his belt, Ward Hall is still in the business. Ward has worked with a monkey girl, a half-lady/half man, numerous fat men, countless sword swallowers, fire eaters, several giants, big snakes, big rats and little horses. He has mastered juggling, ventriloquism and the art of enticing thousands of curious onlookers to part with their money and go inside the tent of his world-famous sideshows. Ward has owned and operated sideshows, animal shows, magic shows, and illusion shows with such fashionable names as Magic on Parade; Wondercade: Aquarama water circus; Gladiators vs. Mankillers wild animal show; World Attractions; Sky High Circus; the Wonder Circus; the Pygmy Village; and the World of Wonders. He has exhibited the World's smallest woman, the World's tallest giant, and employed Pete Terhune, the mighty fire-eating dwarf for 55 years. In addition to owning or co-owning sideshows and circuses during his career, Ward has written four books, four musical stage productions, been in seven movies and more than 100 videos and TV specials, performed at Madison Square Garden and the Lincoln Center in New York City and has sung at Carnegie Hall. He is in the Hall of Fame of both the Outdoor Amusement Business Assoc. and the International Independent Showmen's Assoc. and is a member of the prestigious Circus Ring of Fame in Sarasota, Fla. Ward is the only person in all three of those halls of honor. Ward has operated the sideshow for many big time circuses, including: Ringling Bros. and Barnum & Bailey Circus, the Toby Tyler Circus, the Al G. Miller Circus, Circus Vargas (where he was part owner of the circus for a while), Beatty Cole, and the E.K. Fernandez Circus. Ward Hall's title of King of the Sideshows is not a new or recent act of coronation, and as the ruler of his own little world of misfits and human anomalies, Ward's title isn't self-awarded, but is a judgment rendered by his peers. The year 2014 is the King's 70th year anniversary in show business. This is his story.