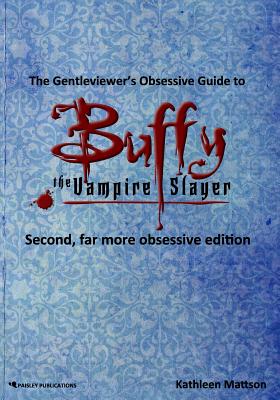 By Kathleen Mattson
Email or call for price

Written for BtVS fans, not newcomers: The Gentleviewer's Obsessive Guide to Buffy the Vampire Slayer is a compendium of the show's pop culture references and more. This a "reference book" for the experienced viewer, not a narrative about the show.

This book is packed with references, cross-references, and indexes so you can track down episode details. If you are expecting long descriptive narratives about the episodes, this book is not for you.

The second edition adds a section on the un-aired "Pitch Pilot," episode arcs for character relationships, and about 40% more cultural and episode cross references.

Included in this book are tables that give at-a-glance access to the characters in each season; music listings for bands in the Bronze as well as background music; and episode arcs of characters and relationships, which give you the viewing maps of the minimum episodes to get their stories. But the main focus of this guide is an exhaustive listing of the numerous cultural references that pop up throughout the show.

Topping off this guide is a robust index with more than 2,000 entries, giving you all the answers to questions like: In which episode is Xander's reference to "Cannibal: the Musical"? In which episode does Spike first come to Sunnydale? When is it that Buffy finally tells the Watcher's Council that without her, they might as well be watching "Masterpiece Theater"?

The Gentleviewer's Obsessive Guide to Buffy the Vampire Slayer should provide hours of fun for Trivial Pursuit enthusiasts and fans of Buffy, the other residents of Sunnydale, and the genius of Joss Whedon. It is also a great research tool for those writing and styudying this amazing show.

But be warned that this book is basically comprised entirely of spoilers.