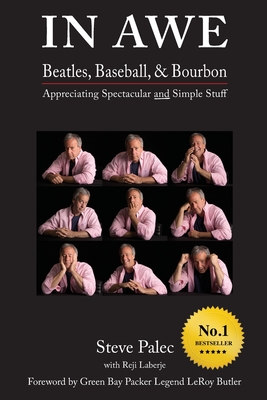 "Steve Palec is one of the most interesting and remarkable people who I have met in my long career."

For 45 years, Steve Palec's baritone has spilled out from the FM speakers playing the music that has been the soundtrack of a generation . . . and of his life. Raised by a British mother who lived through the Blitzkrieg and a Lithuanian father who escaped two concentration camps and survived a third, Palec is a first-generation American who represents everything great about America's rebel generation. Born and raised in Milwaukee, Steve is today a centerpiece of that great city working in commercial real estate, serving in philanthropic and community roles, and often appearing with a smile, a joke, and a bourbon in the stands of Brewers, Bucks, and Packer games. The dad of two, stepdad of three, husband, and radio personality is bringing us a behind-the-scenes look at his behind-the-mic life.

HIS LIFE READS LIKE THE LYRICS OF AN AMERICAN SONG.

Steve Palec's memoir is peppered with the great songs that will bring back memories for everyone paging through his story, but his life is about more than music. From a childhood that evokes Norman Rockwell paintings, though hanging a bit "off-kilter," to a star-studded life in media, Steve is the guy everyone relates to and wants to be Join him on a journey that begins in a speech classroom and takes you into interviews with greats including Ringo Starr, Les Paul, Don McLean, and Alice Cooper. Walk with him on the diamond at Miller Park and the grounds of Lambeau Field. Follow his ups and downs through parenthood, divorces, career juggling, and 96.5 WKLH's Rock & Roll Roots radio show, a staple of Milwaukee radio. Through it all, you may learn to see the world a bit "off-kilter," too.

"At heart, I am just a regular guy who happens to see awe in almost everything."