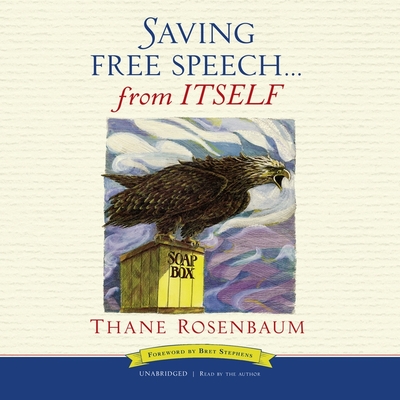 By Thane Rosenbaum (Read by), Bret Stephens (Foreword by)
$90.00
Email or call for price.

Saving Free Speech ... from Itself sets the tone for the fractious discussion of how the First Amendment should be interpreted in today's society and how the free speech aspect of it should not be weaponized by individuals and groups whose agenda includes causing harm to innocent people

It comes with a Foreword by Bret Stephens, the well-known columnist of The New York Times.

In an era of political correctness, race-baiting, terrorist incitement, the 'Danish' cartoons, the shouting down of speakers, and, of course, 'fake news, ' liberals and conservatives are up in arms both about speech and its excesses, and what the First Amendment means. Speech has been weaponized. Everyone knows it, but no one seems to know how to make sense of the current confusion, and what to do about it. Thane Rosenbaum's provocative and compelling book is what is needed to understand this important issue at the heart of our society and politics.

Our nation's founders did not envision speech as a license to trample on the rights of others. And the Supreme Court has decided cases where certain categories of speech are already prohibited without violating the Constitution. Laws banning hate speech are prevalent in other democratic, liberal societies, where speech is not valued above human dignity, and yet in Germany, France, the UK and elsewhere, life continues, freedoms have not rolled to the bottom of the bogeyman of a 'slippery slope, ' and democracies remain vibrant. There is already a great deal of second guessing about the limits of free speech. In 1977, courts permitted neo-Nazis to march in a Chicago suburb populated by Holocaust survivors. Today, many wonder whether the alt-right should have been prevented from marching in Charlottesville in 2017. Even the ACLU, which represented both groups, is having doubts as to whether the First Amendment should override basic notions of equality and citizenship.