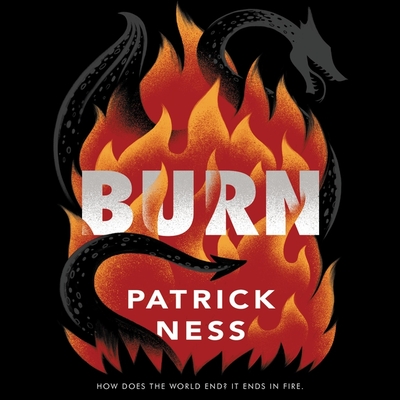 This unique and unconventional story follows Sarah in 1950's rural America as her father hires a dragon to work their farm. What follows next is dragon worshipers, FBI agents, multiple universes, and one big prophecy. It's a classic Patrick Ness book, a little weird but incredibly exciting. If you're not yet convinced, here is my favorite quote:

"It's tragic how well you have been taught to say that with sadness rather than triumph."

On a cold Sunday evening in early 1957, Sarah Dewhurst waited with her father in the parking lot of the Chevron gas station for the dragon he'd hired to help on the farm...

Sarah Dewhurst and her father, outcasts in their little town of Frome, Washington, are forced to hire a dragon to work their farm, something only the poorest of the poor ever have to resort to.

The dragon, Kazimir, has more to him than meets the eye, though. Sarah can't help but be curious about him, an animal who supposedly doesn't have a soul but who is seemingly intent on keeping her safe.

Because the dragon knows something she doesn't. He has arrived at the farm with a prophecy on his mind. A prophecy that involves a deadly assassin, a cult of dragon worshippers, two FBI agents in hot pursuit--and somehow, Sarah Dewhurst herself.