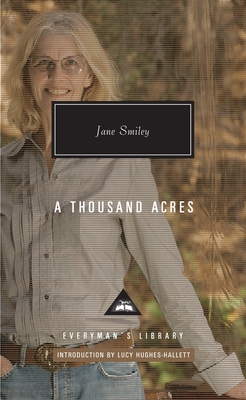 By Jane Smiley, Lucy Hughes-Hallett (Introduction by)
Email or call for price.
Backordered

Smiley's Pulitzer Prize-winning novel is the modern retelling of Shakespeare's King Lear. When aging Larry Cook decides to divide his property among his three daughters, his youngest daughter Caroline thinks he is crazy and she is shut out. The turmoil that ensues brings truths to light concerning marriage, loss, abuse and aging. A book that touches us all.

The only hardcover edition of Jane Smiley's most famous novel--King Lear on an Iowa farm--which won the Pulitzer Prize in 1992. EVERYMAN'S LIBRARY CONTEMPORARY CLASSICS. With a new introduction.

This powerful twentieth-century reimagining of Shakespeare's King Lear centers on a wealthy Iowa farmer who decides to divide his farm among his three daughters. When the youngest objects, she is cut out of his will, which sets in motion a chain of events that brings dark truths to light. Ambitiously conceived and stunningly written, A Thousand Acres spins the most fundamental themes of truth, justice, love, and pride into a universally acclaimed masterpiece.

Jane Smiley is the author of numerous novels, including A Thousand Acres, which was awarded the Pulitzer Prize, and most recently, Golden Age, the concluding volume of The Last Hundred Years trilogy. She is also the author of five works of nonfiction and a series of books for young adults. A member of the American Academy of Arts and Letters, she has also received the PEN Center USA Lifetime Achievement Award for Literature. She lives in Northern California.

“A family portrait that is also a near-epic investigation into the broad landscape, the thousand dark acres of the human heart. . . . The book has all the stark brutality of a Shakespearean tragedy.” —The Washington Post Book World

“Superb. . . . There seems to be nothing Smiley can’t write about fabulously well.” —San Francisco Chronicle

“It has been a long time since a novel so surprised me with its power to haunt. . . . A Thousand Acres [has] the prismatic quality of the greatest art.” —Chicago Tribune

“A full, commanding novel. . . . A story bound and tethered to a lonely road in the Midwest, but drawn from a universal source. . . . Profoundly American.” —The Boston Globe