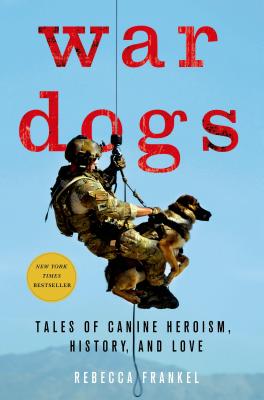 By Rebecca Frankel, Thomas E. Ricks (Foreword by)
Email or call for price.
Out of Print

Under the cover of night, deep in the desert of Afghanistan, a US Army handler led a Special Forces patrol with his military working dog. Without warning an insurgent popped up, his weapon raised. At the handler's command, the dog charged their attacker. There was the flash of steel, the blur of fur, and the sound of a single shot; the handler watched his dog take a bullet. During the weeks it would take the dog to heal, the handler never left its side. The dog had saved his life. Loyal and courageous, dogs are truly man's best friend on the battlefield. While the soldiers may not always feel comfortable calling the bond they form love, the emotions involved are strong and complicated. In War Dogs, Rebecca Frankel offers a riveting mix of on-the-ground reporting, her own hands-on experiences in the military working dog world, and a look at the science of dogs' special abilities-from their amazing noses and powerful jaws to their enormous sensitivity to the emotions of their human companions. The history of dogs in the US military is long and rich, from the spirit-lifting mascots of the Civil War to the dogs still leading patrols hunting for IEDs today. Frankel not only interviewed handlers who deployed with dogs in wars from Vietnam to Iraq, but top military commanders, K-9 program managers, combat-trained therapists who brought dogs into war zones as part of a preemptive measure to stave off PTSD, and veterinary technicians stationed in Bagram. She makes a passionate case for maintaining a robust war-dog force. In a post-9/11 world rife with terrorist threats, nothing is more effective than a bomb-sniffing dog and his handler. With a compelling cast of humans and animals, this moving book is a must read for all dog lovers-military and otherwise.

Rebecca Frankel is deputy editor at Foreign Policy. She is the author of War Dogs: Tales of Canine Heroism, History, and Love a New York Times bestselling book about canines in combat, the subject of her regular Friday column "Rebecca's War Dog of the Week," featured on The Best Defense. Her work has appeared in The Wall Street Journal, The Atlantic, National Geographic, Slate, The Washington Post, and elsewhere. Most recently, Frankel has been as a guest on Conan O'Brien, BBC World News, and the Diane Rehm Show, among others.

Thomas E. Ricks is a Pulitzer Prize winning journalist and author of Fiasco: The American Military Adventure in Iraq, 2003-05, which was a #1 New York Times bestseller.

“In this moving yet uncompromising book, Rebecca Frankel pays a tender tribute to a very special breed of dogs and men.” —The Washington Times

“At the beginning of War Dogs, Rebecca Frankel presents us with an uncomfortable truth: 'There is something less complicated (and ironically more human) about relating to war through the story of a dog.' By the end of her heart-warming and heart-wrenching book, you'll know what she means -- if you don't already.” —Becky Krystal, The Washington Post

“Is a war dog 'a furry but devoted weapon?' Frankel, a senior editor at Foreign Policy, asks. 'A faithful fighter? A fierce soldier? A guardian who keeps watch in the night?” —Bronwen Dickey, The New York Times

“Military aficionados as well as dog lovers will learn from and enjoy this study of canine commandos and the service people who count on them.” —Publishers Weekly

“The relationship between the handler and the handled is 'built first on a mutual trust...with a greater sense of loyalty and even love,' and [Frankel's] examples affectingly prove the bond.” —Marine Corps Times

“This is a lovely book but it's also a surprising book. I opened it looking forward to reading a few good stories about the use of dogs in war. But midway through it, the realization hit me that this is something larger than that, and far deeper: it is a meditation on war and humans. It illuminates conflict from the unexpected angle of the allure of war, and the damage it does to both species.” —Thomas E. Ricks, Pulitzer Prize winning journalist

“Full of compelling stories about military dogs and the handlers who love them (and are often told not to). ... Frankel has done a brilliant job of taking us into another world of dogs and soldiers in war.” —Patricia McConnell, author of The Other End of the Leash

“Full of information about the nature, history, and training of military service canines, War Dogs sometimes reads like an adventure and sometimes reads like a novel that focuses on relationships and affection (here between a soldier and a dog). It is a very satisfying and often emotional read.” —Stanley Coren, author of The Wisdom of Dogs

“A truly wonderful account of ‘man's best friend' in combat--and post-combat--missions: an inspirational, moving book that explains the extraordinary nature of the relationship between dogs and their military handlers in war and the equally extraordinary nature of the relationships between canine companions and military veterans dealing with the seen and unseen wounds of combat.” —General David H. Petraeus (U.S. Army, Retired)

“As an active duty MWD handler, I am always thrilled but equally as wary to hear that someone has written about MWD teams (we're protective like that). Thankfully, Frankel has done a superb job in both communicating what these teams can do on a level that is understandable to civilian and military alike, and highlighting the unique and lasting bond built between dog and handler, a bond many could not otherwise understand.” —Military Working Dogs Facebook Page Administrator