The Roots of Praxiology: French Action Theory from Bourdeau and Espinas to Present Days (Paperback) 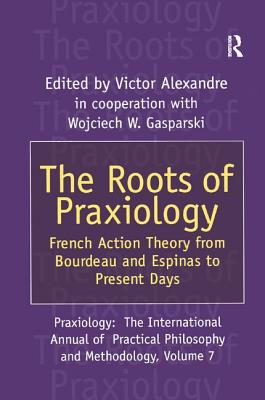 By Victor Alexandre
$52.95
Email or call for price.

Praxiology deals with working and doing from the point of view of effectiveness. It has three components: analysis of concepts involving purposive actions; critique of modes of action from the viewpoint of efficiency; and normative advisory aspects in recommendations for increasing human efficiency. This seventh volume of the Praxiology series focuses on the roots of the discipline. It brings together a selection of writings that illustrate various stages of French thought concerning this philosophy and methodology of action. It is also conceived as a tribute to the writings of Louis Bourdeau and V. Alfred Espinas, key figures in the origin of praxiology.In the first part, The Origin of Praxiology examines these origins in the work of Bourdeau and Espinas. Bourdeau's essay demonstrates the influence of contemporary theories, in particular those of evolution and Comte's positivism, but also shows the critical sense and originality of his thought. With reference to Greek philosophy, Espinas's contribution underlines the complex relations between acts and laws; it enables him to follow the slow progression of individuals as they endeavor to shape their destiny according to the circumstances and the direction of their attitudes. In the second part, Science of Human Action, Maurice Blondel opposes radical rationalism and warns against the positive sciences. Abraham Moles and Elisabeth Rohmer offer an original approach inspired by phenomenology. In the third part, Action Theory and Its Applications, the texts of Roland Caude and Arnold Kaufmann focus on humanist preoccupations, setting action in the economic context of the firm and the city. Victor Alexandre deals with the structural analysis of real and fictitious actions applied to a large number of elementary acts. Robert Vall e's concluding essay proposes a model consisting of operators for observation, decision, and effectiveness in order to formalize the link between knowledge and action.What emerges from this volume is the constant idea that an individual's destiny is linked to the efficiency of his acts, but also that efficiency as a concept itself has multiple aspects, none of which should be underestimated.