Of Blood and Bone: Chronicles of The One, Book 2 (Paperback) 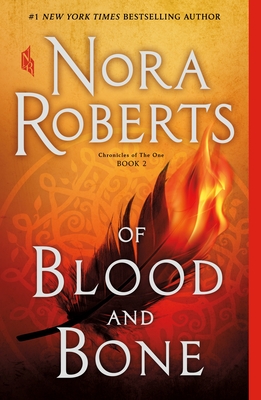 What an incredible sequel to Year One! Packed with adventure and magic, Nora Roberts seamlessly stitches together characters of old and new, bringing them together in this new and sometimes dark world. This book and series is a great mixture of sci-fi, fantasy, and dystopian thriller, making it a must-read for any fans of these genres.

“The time has come for an awakening, and it will not come without pain. The world has been brought down by a virus and it awaits redemption, which only the One can deliver. Fallon Swift is nearly 13 and will soon enter into a time of challenge like none other. She must learn to fight, to gain wisdom, and to understand her future. Will she become the woman she is meant to be before the world outside her farm closes in around her? Of Blood and Bone is both entertaining and insightful, so make yourself cozy, grab a cup of tea, and brace yourself for a good ride.”
— Linda Bond, Auntie's Bookstore, Spokane, WA

Nora Roberts, the #1 New York Times bestselling author of the epic Year One returns with Of Blood and Bone, a new tale of terror and magic in a brand new world.

They look like an everyday family living an ordinary life. But beyond the edges of this peaceful farm, unimaginable forces of light and dark have been unleashed.

Fallon Swift, approaching her thirteenth birthday, barely knows the world that existed before—the city where her parents lived, now in ruins and reclaimed by nature since the Doom sickened and killed billions. Traveling anywhere is a danger, as vicious gangs of Raiders and fanatics called Purity Warriors search for their next victim. Those like Fallon, in possession of gifts, are hunted—and the time is coming when her true nature, her identity as The One, can no longer be hidden.

In a mysterious shelter in the forest, her training is about to begin under the guidance of Mallick, whose skills have been honed over centuries. She will learn the old ways of healing; study and spar; encounter faeries and elves and shifters; and find powers within herself she never imagined. And when the time is right, she will take up the sword, and fight. For until she grows into the woman she was born to be, the world outside will never be whole again.

Nora Roberts is the #1 New York Times bestselling author of more than 200 novels, including Shelter in Place, Year One, Come Sundown, and many more. She is also the author of the bestselling In Death series written under the pen name J.D. Robb. There are more than five hundred million copies of her books in print.

"Roberts continues her apocalyptic Chronicles of The One with a mesmerizing follow-up that is bold and breathtaking...meeting the next generation and watching the heroine grow into her powers and leadership is enthralling." -- Kirkus

"[Of Blood and Bone] can be read on its own and will appeal to fans of fast-paced dystopian tales with a strong heroine." -- Publishers Weekly

"Roberts narrates the tale with such passion, that you visualize every sentence you read. With the ability to transcend time and space, and with shadowy figures who may represent good or evil, it makes Of Blood and Bonethe perfect book to advance this trilogy." - Shelf Life