The Better Half: On the Genetic Superiority of Women (Hardcover) 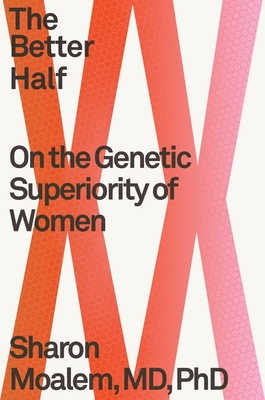 Here are some facts: Women live longer than men. They have stronger immune systems. They're better at fighting cancer and surviving famine, and even see the world in a wider variety of colors. They are simply stronger than men at every stage of life. Why is this? And why are we taught the opposite?

To find out, Dr. Sharon Moalem drew on his own medical experiences - treating premature babies in the neonatal intensive care unit; recruiting the elderly for neurogenetic studies; tending to HIV-positive orphans in Thailand - and tried to understand why in every instance men were consistently less likely to thrive. The answer, he discovered, lies in our genetics: two X chromosomes offer a powerful survival advantage.

With clear, captivating prose that weaves together eye-opening research, case studies, diverse examples ranging from the behavior of honeybees to American pioneers, as well as experiences from his personal life and his own patients, Moalem explains why genetic females triumph over males when it comes to resiliency, intellect, stamina, immunity and much more. He also calls for a reconsideration of our male-centric, one-size-fits-all view of medical studies and even how we prescribe medications - a view that still sees women through the lens of men.

Revolutionary and yet utterly convincing, The Better Half will make you see humanity and the survival of our species anew.

Sharon Moalem, MD, PhD, is an award-winning scientist, physician, and New York Times bestselling author. He is a world-renowned expert in genetics and rare genetic conditions whose clinical research led to the discovery and description of two new rare genetic conditions. Dr. Moalem has served as an associate editor for the Journal of Alzheimer’s Disease and is the cofounder of two biotechnology companies.

He has been awarded more than twenty-five patents worldwide for his inventions in human health and biotechnology. His scientific work led to his discovery of a first-in-class member of a novel type of antibiotic compound that addresses the paucity of available drugs for superbug infections caused by microorganisms such as methicillin-resistant Staphylococcus aureus (MRSA).

His work brings together evolution, genetics, biology, and medicine. He is the author of the New York Times bestseller Survival of the Sickest, as well as How Sex Works, The DNA Restart, and Inheritance: How Our Genes Change Our Lives—and Our Lives Change Our Genes, and The Better Half. His books have been translated into more than thirty-five languages.

“A fascinating theory . . . As men continue to fill the Covid-19 morgues faster than women, Moalem is on a quest to draw the world’s attention to a chromosomal tool we might just need.” —Gaia Vince, The Guardian

“The Better Half is an eye-opening book . . . Full of wonderful tidbits of information—from the existence of a female prostate gland to the number of honey bee flying miles it takes to make 1lb of honey. The celebration of the genetic diversity offered by the female’s second X-chromosome is wholehearted and the examples Moalem gives are highly effective. He has written a powerful antidote to the myth of the ‘weaker sex’.” —Gina Rippon, The Guardian

"Moalem’s sharp text serves as a challenge to explore the vast unknown territory of chromosomal differences in men and women." —Kirkus Reviews

"Moalem presents a cutting-edge look at the stubborn conservatism of modern medicine and what we can do to change it." —Booklist

"Although Dr. Moalem had me at the subtitle, I tore through this fascinating, eye-opening book in one sitting. Provocative, crackling with wit and insight, THE BETTER HALF argues that science has shortchanged women in all levels of research and convincingly reveals that the true differences between men and women come down to longevity, intellect, resilience, and immunity to disease. Now it all makes sense why 95 percent of people who have reached the age of 110 are women." —Jancee Dunn, New York Times–bestselling author of How Not to Hate Your Husband After Kids

"Let’s hear it for the X-chromosome! After decades, if not centuries, of bad press for women and their vulnerable biology, The Better Half gives chapter and verse to show that 'almost everything that is biologically difficult to do in life is done better by females.' An eye- and mind-opening celebration of the reserve genetic horsepower that having two X-chromosomes can bestow, The Better Half is a powerful antidote to the myth of a ‘weaker sex.'" —Gina Rippon, PhD, author of The Gendered Brain and Professor Emeritus of Cognitive Neuroimaging at Aston University, Birmingham

This book provides the crucial scientific reasoning behind why it is essential to include males and females, both in people and animals, in order to get accurate results in medical research. —Temple Grandin, PhD, New York Times–bestselling author of The Autistic Brain and Thinking in Pictures

"In The Better Half, Sharon Moalem presents his compelling argument for the resilience seen in women. But the real genius is the poetic justice he metes out by highlighting the brilliant women who remain unsung heroes in these discoveries." —William J. Sullivan, PhD, Showalter Professor of Pharmacology & Toxicology, Microbiology & Immunology at Indiana University School of Medicine and author of Pleased to Meet Me

"The Better Half explores the genetic differences between males and females in a way that is both original and scientifically compelling. This book provides a great read, and lots to think about, for specialists and the public alike." —Han G. Brunner, MD, PhD, Professor of Human Genetics at Radboud University Nijmegen Medical Center and Maastricht University Medical Center, the Netherlands