The Vanishing American Adult: Our Coming-of-Age Crisis--and How to Rebuild a Culture of Self-Reliance (Paperback) 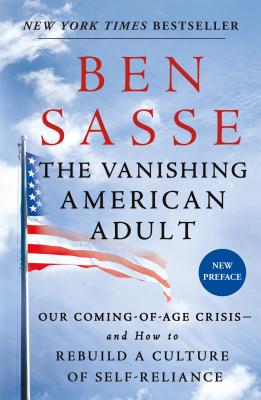 In an era of safe spaces, trigger warnings, and an unprecedented election, the country's youth are in crisis. Senator Ben Sasse warns the nation about the existential threat to America's future.

Many of the coming-of-age rituals that have defined the American experience since the Founding: learning the value of working with your hands, leaving home to start a family, becoming economically self-reliant—are being delayed or skipped altogether. The statistics are daunting: 30% of college students drop out after the first year, and only 4 in 10 graduate. One in three 18-to-34 year-olds live with their parents.

From these disparate phenomena: Nebraska Senator Ben Sasse who as president of a Midwestern college observed the trials of this generation up close, sees an existential threat to the American way of life.

In The Vanishing American Adult, Sasse diagnoses the causes of a generation that can't grow up and offers a path for raising children to become active and engaged citizens. He identifies core formative experiences that all young people should pursue: hard work to appreciate the benefits of labor, travel to understand deprivation and want, the power of reading, the importance of nurturing your body—and explains how parents can encourage them.

Our democracy depends on responsible, contributing adults to function properly—without them America falls prey to populist demagogues. A call to arms, The Vanishing American Adult will ignite a much-needed debate about the link between the way we're raising our children and the future of our country.

U.S. Senator Ben Sasse is a fifth-generation Nebraskan. The son of a football and wrestling coach, he attended public school in Fremont, Nebraska, and spent his summers working soybean and corn fields. He was recruited to wrestle at Harvard before attending Oxford, and later earned a Ph.D. in American history from Yale. Prior to the Senate, Sasse spent five years as president of Midland University back in his hometown. As perhaps the only commuting family in the U.S. Senate, Ben and his wife, Melissa, live in Nebraska but are homeschooling their three children as they commute weekly back and forth to Washington, DC.

“Sasse has published a book of political philosophy in the form of a guide to parenting.” —George Will, The Washington Post

“The Vanishing American Adult is written as a reflection on the purpose and nature of education… At its core, the book also pleads for something greater: the rehabilitation of shared values in a time of intense difference; a focus on culture as the deepest challenge of politics; and the ability to imagine virtue as part of who we are as citizens.” —The Atlantic

“Sasse write well and entertainingly, with wit and erudition, but never pedantic in advancing his ideas. And those ideas have great merit.” —The Washington Times

“Sasse doesn’t pretend to offer a silver bullet, but he offers clear steps for nudging our kids out of their comfort zones and toward curiosity and that elusive compulsion… fantastic advice and chock-full of it.” —Chicago Tribune

"If you want to raise a healthy and happy family in a rapidly changing world, [The Vanishing American Adult] will provide you with copious notes and ideas...Ultimately, this book has the potential to do what so few books can promise: make you a better person." ?The Daily Beast

“Deeply thoughtful, delightfully personal, and bravely ecumenical in scope, Sasse’s guide for stemming the tide of delayed responsibility showcases what is both practical and possible.” —Booklist

“Sasse’s belief that meaningful work gives life purpose, grounded as it is in ancient philosophy and lived experience, is hard to argue with.” —The Weekly Standard

"The Vanishing American Adult offers a worthwhile reminder that our families are far more important than politics, and developing the next generation needs to be addressed without the help of Washington D.C." —Lincoln Journal Star

"Why do you do what you do? For many American parents, caught up in a swirl of activity and competition, it might be difficult, if we're really honest with ourselves, to find an immediate and satisfying answer. The Vanishing American Adult offers a grand opportunity to stop, slow down, and think." —National Review

"I know Ben Sasse as one of the most important emerging voices in our national dialogue—plain-spoken, brilliant, and unafraid to speak his mind. Whether we agree or disagree, when he speaks—I'm listening. And when he writes, I'm definitely reading." —U.S. Senator Cory Booker

"Ben Sasse is a thoughtful father, historian and Senator. And he has written a non-political book about one of the most important policy topics of the day—how to raise self-reliant and adventurous children. Any parent will read this alternating between "damn right" and guilt pangs. The book is practical, helpful and conversational. I wish it had been written 20 years ago!" —U.S. Senator Tim Kaine

"Historian, dad, and former college president Ben Sasse has nailed it: we're failing our kids. Each generation must mold the next into solid citizens at home, at work, and in the city square. This book is a well-timed rebuke and a time-tested recipe—just what America needs." —U.S. Senator Marco Rubio

"Couple years ago, somebody told me a senator from Nebraska was tweeting about the essential business of castrating bulls. I didn't know who Ben Sasse was, but I was intrigued his use of social media. I've since met him, and I like him. If you read this book, you will too. It's excellent. In particular, the "Lessons from the Ranch" section should be required reading for every parent, every child, and every elected official in America. This really is a book for everyone—well, except the bulls." —Mike Rowe, Creator and Host of Dirty Jobs

"Being an adolescent myself, this book shed some light on my situation and I'm glad my wife was kind enough to read it to me. In all seriousness, even though my alter ego doesn't read, I'm a dad and I do. Ben is dead on point on every page and this book should become required reading for every parent. Bravo Ben!! (P.S. Please send another copy because I've got pudding on this one.)" —Dan Whitney, A.K.A., Larry the Cable Guy

"Y'all, a senator wrote an interesting book! That's basically a miracle. Somewhere between "the kids are all right" and "get off my lawn" exists Ben Sasse's The Vanishing American Adult, and it's a fascinating place to be. At a time when adolescence has become a destination, rather than a journey, Sasse asks us to wrestle with remaking it. Let’s get kids moving again through the hard work of becoming grown-ups. Avoiding the process could be especially perilous for a nation founded by a bunch of young people with an audacious idea and the will to fight for it, in the hopes that generations to come would be gritty enough do the same." —Mary Katharine Ham, CNN

"As we struggle to overcome the spiritual decay of the digital age, it's incredibly heartening that at least one man in Washington gets it and wants to help." —Mollie Z. Hemingway, Senior Editor, The Federalist

“Ben Sasse is a good Senator, a great thinker and an even better writer. His book tells the truth about what truly ails America. It’s not partisan politics. It’s us – our families, and our loss of confidence in the future. He argues effectively that our national destiny depends less on what happens in Washington and more on what we do at home. But take heart – Sasse offers powerful solutions, both personal and universal, that will restore our faith in the future and our responsibilities to each other as parents, neighbors, and citizens of the greatest country on earth.” —Dr. Frank Luntz, CBS News & Fox News Analyst

“Ben Sasse’s book is not an angry diatribe against the younger generation. Nor is it a call to return to an idyllic vision of days gone by. Rather, it’s a practical, insightful call to all Americans to reject passivity, embrace initiative, and boldly approach the future with purpose and vision.” —Jim Daly, President, Focus on the Family