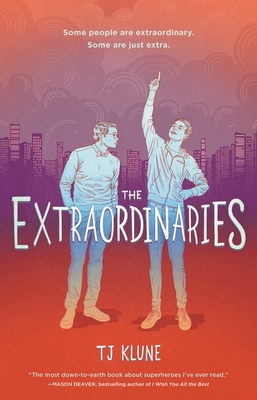 Nick Bell is a character who truly stole my heart from the beginning. He’s funny, awkward, and unapologetically obsessed with the vigilante superheroes called Extraordinaries. Nick’s plan to make himself extraordinary is every bit as cringy and flawed as one might expect, but you gotta love his determination.  This is a heartwarming and hilarious story that celebrates the differences that make us who we are. I am more than ready to read a sequel!

An Indie Bestseller!
An Indie Next Pick!

Some people are extraordinary. Some are just extra. TJ Klune's YA debut, The Extraordinaries, is a queer coming-of-age story about a fanboy with ADHD and the heroes he loves.

Nick Bell? Not extraordinary. But being the most popular fanfiction writer in the Extraordinaries fandom is a superpower, right?

After a chance encounter with Shadow Star, Nova City’s mightiest hero (and Nick’s biggest crush), Nick sets out to make himself extraordinary. And he’ll do it with or without the reluctant help of Seth Gray, Nick's best friend (and maybe the love of his life).

TJ KLUNE is a USA Today bestselling, Lambda Literary Award-winning author and an ex-claims examiner for an insurance company. His novels include The House in the Cerulean Sea and The Extraordinaries. Being queer himself, TJ believes it's important—now more than ever—to have accurate, positive, queer representation in stories.

"Uproariously funny, this razor-sharp book is half a love-letter to fandom, half self-aware satire, and wholly lovable. I haven't read anything quite like this before!" —Sophie Gonzales, author of Only Mostly Devastated

“The most down-to-earth book about superheroes I've ever read. I laughed, I cried, and I had a smile on my face the entire time I was reading it” —Mason Deaver, bestselling author of I Wish You All the Best

“Klune plays with superhero genre tropes and fan-fiction clichés with the skill of a true fan—completely aware of their ridiculousness but in love with them anyway. Hilarious, sweet, and absolutely super!” —Kirkus

"If you're looking for a book to read and then reread several times before the next Spider-Man movie releases, this will be perfect." —Buzzfeed

“Just what teens who devour the CW’s DC shows and Marvel’s cinematic universe films need to tide them over as they await new seasons of superhero television.” —BookPage

“Klune’s romp is irresistibly readable…. Readers will be delighted!” —Booklist

“Nick’s ADHD and almost comical optimism combine to make a charming and entertaining hero[.] There’s plenty in this lighthearted, superhero-interested teen dramedy for kids who feel like they’re sometimes on the outside, including the positive representation of a teen with ADHD.” —Publishers Weekly

“Klune takes cues from Peter Milligan’s classic queer comic Enigma, with an Everyman bewildered by the superhero story that seems to revolve around him. Hand to teens involved in fandom, writers of fan fiction, lovers of superhero stories, and queer romance readers.” —School Library Journal

“TJ Klune is a master storyteller.” —The Mary Sue

“Sweet, comforting, and kind, this book is very close to perfect. The House in the Cerulean Sea is a work of classic children's literature written for adults and children alike, with the perspective and delicacy of the modern day. I cannot recommend it highly enough.”—Seanan McGuire, New York Times bestselling author of Every Heart a Doorway, on The House in the Cerulean Sea

“Quirk and charm give way to a serious exploration of the dangers of complacency in this delightful, thought-provoking Orwellian fantasy from Klune.... This tale of found family is hopeful to its core. Readers will revel in Klune’s wit and ingenuity.” —Publishers Weekly (starred review) on The House in the Cerulean Sea

“If ever there was an author to watch out for, [Klune] is definitely that author.” —Culturess Daily

“Hilarious and irreverent.” —USA Today's Happy Ever After on The Lightning-Struck Heart