The Escape Room: A Novel (Paperback) 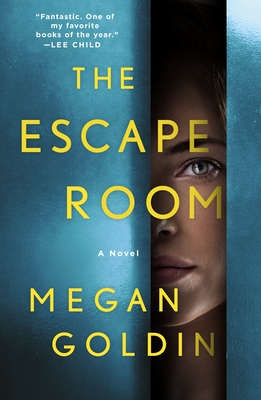 Revenge has been called a dish best served cold. But in this crafty thriller, it’s served in a locked, sweltering, claustrophobic elevator in a deserted part of the city where four rich and greedy investment bankers have been lured, then trapped, in a team-building exercise gone awry. Who is at the controls, giving the group cryptic clues to unravel while they try to escape the room, their pasts, and each other? And why did someone bring a gun?

“Megan Goldin’s debut is sheer perfection. I was enthralled, obsessed, and utterly delighted from the gripping first chapter to the very end. The genuine quality of Goldin’s voice is so engaging, you feel like you’re discussing your favorite topics with a best friend. In The Escape Room, four investment bankers trapped in an overheated elevator reach a literal and figurative boiling point as survival becomes questionable. As these deeply flawed central characters fight to keep it together, a mysterious force works behind the glass walls to ensure they leave the elevator changed forever, if they leave at all. I loved every second of this novel and simply cannot wait to tell everyone about it!”
— Lauren Messamore, Watermark Books & Cafe, Wichita, KS

"One of my favorite books of the year."—Lee Child

“Cancel all your plans and call in sick; once you start reading, you'll be caught in your own escape room—the only key to freedom is turning the last page!”—Kirkus Reviews (starred)

Welcome to the escape room. Your goal is simple. Get out alive.

In the lucrative world of finance, Vincent, Jules, Sylvie, and Sam are at the top of their game. They’ve mastered the art of the deal and celebrate their success in style—but a life of extreme luxury always comes at a cost.

Invited to participate in an escape room challenge as a team-building exercise, the ferociously competitive co-workers crowd into the elevator of a high-rise building, eager to prove themselves. But when the lights go off and the doors stay shut, it quickly becomes clear that this is no ordinary competition: they’re caught in a dangerous game of survival.

Trapped in the dark, the colleagues must put aside their bitter rivalries and work together to solve cryptic clues to break free. But as the game begins to reveal the team’s darkest secrets, they realize there’s a price to be paid for the terrible deeds they committed in their ruthless climb up the corporate ladder. As tempers fray, and the clues turn deadly, they must solve one final chilling puzzle: which one of them will kill in order to survive?

MEGAN GOLDIN worked as a correspondent for Reuters and other media outlets where she covered war, peace, international terrorism and financial meltdowns in the Middle East and Asia. She is now based in Melbourne, Australia where she raises three sons and is a foster mum to Labrador puppies learning to be guide dogs.

Praise for The Escape Room:

“The pages turn themselves…THE ESCAPE ROOM delivers all that it promises. It is a sleek, well-crafted ride to a surprisingly twisty conclusion.” —New York Times Book Review

“THE ESCAPE ROOM works as the ultimate locked-room mystery…Goldin excels at illustrating the pressures of a Wall Street career.” —Associated Press

“There is clearly no happy ending likely for the four colleagues trapped inside [the escape room]; but fans of JP Delany and Ruth Ware will want to be right in there with them…a nail-biting tale of a corporate team-building exercise gone horribly wrong.” —Booklist

“Riveting…[a] tale of greed and revenge set on Wall Street…Thriller fans will eagerly turn the pages to see what happens next.” —Publishers Weekly

"Fantastic. One of my favorite books of the year." —Lee Child

"Amazing...a thriller set in an elevator [that explores] the vast territory of people's worst natures. A nightmarish look inside ourselves. Simply riveting." —Louise Penny

“Smart and compelling... I devoured this novel!” —Karen Cleveland, bestselling author of Need to Know