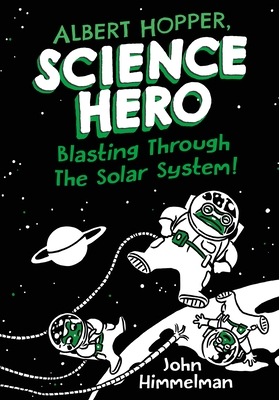 This is book number 2 in the Albert Hopper, Science Hero series.

Jump aboard a magma-defying wormship in search of the center of the earth! Facts, fun, and flubs will make sure that the reader is successful, but things are not so certain for our hopping Science Heroes.

In John Himmelman's early chapter book series, Albert Hopper is a frog—and a science hero! He seeks to explore the world and beyond, generating laughs and imparting STEM wisdom as he goes.

Science Hero Albert Hopper and trusty Junior Science Heroes Polly and Tad are ready for their next adventure. This time, they're blasting through the solar system!

As the heroes float through the sulphuric acid clouds of Venus, dodge the solar flares of the sun, and weather the space storms of Jupiter, their science smarts are put to the test. Anything can happen on this hilarious ride in Albert Hopper, Science Hero: Blasting Through the Solar System.

John Himmelman is the author and illustrator of more than sixty books for children, including Chickens to the Rescue. He lives in Connecticut with his family.

John Himmelman is the author and illustrator of more than sixty books for children, including Chickens to the Rescue. He lives in Connecticut with his family.

"A ground-shaking, pulse-pounding journey to the Earth's core and back (with a few side trips along the way). In typically grandiloquent tones—"We shall be…WORMING TO the CENTER OF THE EARTH!"—froggy explorer Albert Hopper invites Junior Science Heroes (and niece and nephew) Polly and Tad on a voyage of danger and discovery aboard aptly named mechanical drill Wiggles . . . . Will leave readers eager to…GO AGAIN!" —Kirkus Reviews