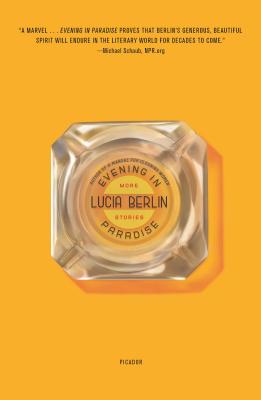 An absolutely masterful writer of short stories, Lucia Berlin has recently found widespread posthumous acclaim.  The stories contained in this most recent volume of her work are observant, funny, touching, and full of life.  Berlin's fiction borrows heavily from her own experiences, which brings a relatable truth to the lives of her protagonists, and her stunning prose is particularly effective at capturing feelings of alienation and loneliness.  Her work is not to be missed.

In 2015, Farrar, Straus and Giroux published A Manual for Cleaning Women, a posthumous story collection by a relatively unknown writer, to wild, widespread acclaim. It was a New York Times bestseller; the paper’s Book Review named it one of the Ten Best Books of 2015; and NPR, Time, Entertainment Weekly, The Guardian, The Washington Post, the Chicago Tribune, and other outlets gave the book rave reviews.

The book’s author, Lucia Berlin, earned comparisons to Raymond Carver, Grace Paley, Alice Munro, and Anton Chekhov. Evening in Paradise is a careful selection from Berlin’s remaining stories—twenty-two gems that showcase the gritty glamour that made readers fall in love with her. From Texas to Chile, Mexico to New York City, Berlin finds beauty in the darkest places and darkness in the seemingly pristine. Evening in Paradise is an essential piece of Berlin’s oeuvre, a jewel-box follow-up for new and old fans.

Lucia Berlin (1936-2004) worked brilliantly but sporadically throughout the 1960s, 1970s, and 1980s. Her stories are inspired by her early childhood in various Western mining towns; her glamorous teenage years in Santiago, Chile; three failed marriages; a lifelong problem with alcoholism; her years spent in Berkeley, New Mexico, and Mexico City; and the various jobs she later held to support her writing and her four sons. Sober and writing steadily by the 1990s, she took a visiting writer's post at the University of Colorado Boulder in 1994 and was soon promoted to associate professor. In 2001, in failing health, she moved to Southern California to be near her sons. She died in 2004 in Marina del Rey. Her posthumous collection, A Manual for Cleaning Women, was named one of the New York Times Book Review’s Ten Best Books of 2015.

"Berlin is not only a soulful chronicler of the lost corners of America, whose semi-autobiographical stories brim with red caliche clay, arroyos, drainage ditches and smelter towns. She is not only a writer of vivid bursts of language . . . She is also a distinctly female voice, a raspy Marlene Dietrich." --Nadja Spiegelman, The New York Times Book Review

"Berlin was a writer of tender, chaotic and careworn short stories. Her work can remind you of Raymond Carver's or Grace Paley's or Denis Johnson's . . . One thing that makes Berlin so valuable is her gift for evoking the sweetness and earnestness of young women who fall in love . . . Berlin probably deserved a Pulitzer Prize.." --Dwight Garner, The New York Times

"The stories in Evening in Paradise have that familiar Berlin affect — the clipped prose, the startling details, the signal one-liners or repeated words that burrow into you. Berlin’s prose reads like poetry and feels like memory. Fraught moments are telescoped into spare, suggestive exchanges that directly appeal to the senses."--Maggie Trapp, The Washington Post

"[Berlin] is a master at capturing women in states of disintegration . . . Much of the world that Berlin describes is harrowing for women, and yet her stories . . . cheerfully refuse to erase either the women or the brutality that deranges them. Instead, she rips them up further and pastes them together again, making ruined, radiant chimeras summoned from an unfrequented corner of 20th-century America." --Jordan Kisner, The Atlantic

"Thank god for the posthumous revival of Lucia Berlin — how sad it would be to have never experienced her distinctive, vibrant voice. Her characters are utterly captivating . . . and her scenery envelops you. But it's the early stories, those that follow the meandering adventures of kids just trying to fill their days, that are most alive." --Arianna Rebolini, Buzzfeed (Best Books of Fall 2018)

"Berlin's new book is a marvel, filled with deeply touching stories about lives on the fringes. It's a work of remembrance of the kinds of people who might otherwise be forgotten . . . there's not a single story in Evening in Paradise that's less than beautiful . . . Evening in Paradise proves that Berlin's generous, beautiful spirit will endure in the literary world for decades to come." --Michael Schaub, NPR.org

"Once again [Berlin] makes original art from her chequered life . . . When the words flowed, Berlin managed to perform small miracles with them. Whether describing lucky breaks or hard knocks, her prose is intense and intimate, at once disconcerting and entrancing." --The Economist

"[Evening in Paradise] reveals just how full a body of rich work Berlin left behind . . . Time and again, the stories reveal that her subject wasn’t domestic life but life itself, which for her often happened to be filtered through the domestic." --Ellie Robins, Los Angeles Times

"What molds the fiction is Berlin’s artistic sensibility — her global perspective, the shrewd compassion with which she scrutinizes her characters, and the absurdity — not to mention the flora — that populates the many landscapes of her world." --Emma Heath, San Francisco Chronicle

"This never-before-published memoir and new collection are cause for jubilation. In part because they make it clear Berlin's gifts were vast, complex, and full of tonal warmths . . . Like Chekhov, Berlin was a beautiful framer of stories . . ." --John Freeman, Boston Globe

"Berlin’s gifts are not ones you have ever tried or been told to cultivate. The details she chooses are those you have purposely eliminated, with that hitch in your ear that tells you to keep everything timeless . . . Berlin is telling us that you can use and reuse the raw moments, that the texture of life is to be taken seriously, that those spontaneous bubblings of experience will spark faith, belief, devotion for the same reason that springs of youth and holy fonts do: because they are cold and clear and inexhaustible, because we can drink them out of our hands." --Patricia Lockwood, London Review of Books

"Berlin is forensic in her quality of observation, and her prose rhythm is almost notational in its fluency." --Joanne O'Leary, Bookforum

"Prepare to fall in love all over again . . . the cunning, beautiful creation of a genius of the form." --Kristin Iversen, NYLON

“Long before the current autofiction craze, Lucia Berlin was spinning her day-to-day into powerfully spare prose that ached with brutal authenticity . . . these new volumes become a jigsaw-puzzle portrait of a long-neglected literary legend, baring the autobiographical material that filtered so forcefully into her fiction. The mystery of her fiction is not, it turns out, in the source of its inspiration.” —Lauren Mechling, Vogue

"Reading [Berlin] in today's frenzied doomsday news flash feels like a vacation, a breath of fresh air. Despite the chatter and chaos, there is the promise of change tomorrow, be it good or bad." --Keziah Weir, Vanity Fair

"Every bit as generous and perceptive as A Manual for Cleaning Women . . . Considered together, the two collections leave little doubt she is one of the greatest American short story writers of the 20th century . . . These 22 stories show her startling range and unwavering devotion to remaining open, refusing to judge any of her characters, whether delinquent, conniving, or alcoholic." --Dylan Brown, Los Angeles Review of Books

"Some of the 22 stories here are wonderful; others nothing more than a collage of shimmering images. All feature her distinctive voice, which operates in the space between free verse and prose." --Ann Levin, Associated Press

"[Evening in Paradise] affirms Berlin as one of the more underrated writers of her time." --Entertainment Weekly

"Berlin’s stories are remarkable for their dark humour, bright prose and audacious lack of structural integrity – if her collections were houses, their hallways would change direction without warning, and their rooms would be bright and dark at the same time . . . The fiction in which she made her home does not descend into the dirt, or darkness, of urban alienation – it emerges from that dirt. Berlin wrote in pursuit of a sense of belonging, and her fiction is a homecoming." --Nina Ellis, Granta

"In Evening in Paradise—which reads like novel-in-stories—Berlin shows that she was a master of the short story. These pieces remind me of something like Mavis Gallant crossed with Roberto Bolaño—there’s an acute, postwar, working-class milieu, crossed with such insight into the US/Mexico borderlands and Latin America (Berlin knew these areas so well). This book is so transportative, so wonderful." --Veronica Esposito, Lit Hub

"Anyone worried that Evening in Paradise might somehow be inferior to Manual is in for a pleasant surprise . . .this new collection of stories showcases the same remarkable skill and pathos that Berlin fans have long cherished . . . Berlin has a particular, albeit well-nuanced, sympathy for intelligent, outspoken women who, like herself, are struggling to get by." --Ryan Smernoff, Los Angeles Review of Books

"Berlin’s stories, largely autobiographical tales of working class life in the American West, slipped beneath the radar in her lifetime but galvanized contemporary readers. Now we have a second, smaller volume that is every bit as good as its predecessor. If you’ve never read Berlin, now’s your chance." --Tom Beer, Newsday

"The nimbleness with which Berlin moves between proximate feelings . . . is what makes the work so ruthless, sympathetic, and comic all at once . . . The autobiographical content of Berlin’s stories doesn’t undermine their artfulness, any more than their humor undermines the ugliness of the situations depicted. Rather, both sets of factors exist in searing, inimitable tension." --Annie Adams, The Sewanee Review

"The short story queen . . . The stories are whip-smart and strangely funny, and you'll be thinking about them for days afterward." --Melissa Ragsdale, Bustle

"Read one of [Berlin's] powerful, authentic stories that peer right into the human condition, and you'll understand the hype." --Elena Nicolaou, Refinery29

"Blessedly, a second volume with 22 more stories is in no way second rate but rather features more seductive, sparkling autofiction . . . No dead author is more alive on the page than Berlin: funny, dark, and so in love with the world." --Kirkus (starred review)

"Wonderful . . . The collection is significant partly because it reveals the centrality of homesickness and geography to Berlin’s work . . . Berlin’s writing achieves a dreamy, delightful effect as it provides a look back through time. This collection should further bolster Berlin’s reputation as one of the strongest short story writers of the 20th century." --Publishers Weekly (starred review)