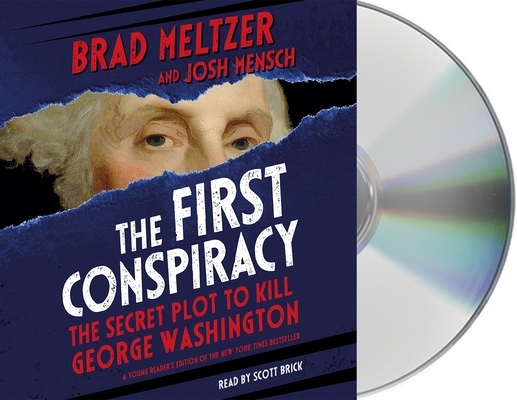 "[Narrator Scott Brick]...makes the pages come alive. He varies his volume during dramatic moments, at times almost whispering. He also varies his tone, enhancing the drama but never overpowering it...This work is an excellent example of the perfect melding of text and narrator." — AudioFile Magazine on The First Conspiracy, Earphones Award Winner

#1 New York Times bestselling author Brad Meltzer unravels the truth behind the secret assassination attempt on George Washington and how the plot helped create the CIA and the FBI in this young listener's adaptation for younger audiences.

1776.
The early days of the Revolutionary War.

It supposedly began with Thomas Hickey, a private in the Continental Army, and New York governor William Tryon. In an astonishing power grab, they plotted to kill Hickey's boss: a man by the name of George Washington.

In the end, Hickey was caught, brought to trial, and found guilty. It would seem he became the first person in the new nation to be executed for treason.

But to this day, nobody knows for sure if this story is true. In The First Conspiracy, Brad Meltzer sheds light on the close-kept secrets and compelling details surrounding this story and exposes the history of how the assassination plot catalyzed the creation of the CIA and FBI.

This fascinating investigation offers young listeners an in-depth look at the facts and remaining questions that surround this contested historical event.

BRAD MELTZER is the #1 New York Times bestselling author of The Escape Artist, The Inner Circle, and many other bestselling thrillers, as well as the "Ordinary People Change the World" series. He is also the host of the History Channel TV shows Brad Meltzer’s Decoded and Brad Meltzer’s Lost History, which he used to help find the missing 9/11 flag that the firefighters raised at Ground Zero.

JOSH MENSCH is a New York Times bestselling author and documentary television producer with a focus on American history and culture. He is the coauthor with Brad Meltzer of the nonfiction history book The First Conspiracy: The Secret Plot to Kill George Washington. For television, Josh has written, produced and directed acclaimed series for PBS, The History Channel, National Geographic, Discovery and other networks. He lives in Brooklyn with his wife and two children.

Scott Brick first began narrating audiobooks in 2000, and after recording almost 400 titles in five years, AudioFile magazine named Brick a Golden Voice and “one of the fastest-rising stars in the audiobook galaxy.” He has read a number of titles in Frank Herbert’s bestselling Dune series, and he won the 2003 Science Fiction Audie Award for Dune: The Butlerian Jihad. Brick has narrated for many popular authors, including Michael Pollan, Joseph Finder, Tom Clancy, and Ayn Rand. He has also won over 40 AudioFile Earphones Awards and the AudioFile award for Best Voice in Mystery and Suspense 2011. In 2007, Brick was named Publishers Weekly’s Narrator of the Year.

Brick has performed on film, television and radio. He appeared on stage throughout the United States in productions of Cyrano, Hamlet, Macbeth and other plays. In addition to his acting work, Brick choreographs fight sequences, and was a combatant in films including Romeo and Juliet, The Fantasticks and Robin Hood: Men in Tights. He has also been hired by Morgan Freeman to write the screenplay adaptation of Arthur C. Clarke’s Rendezvous with Rama.