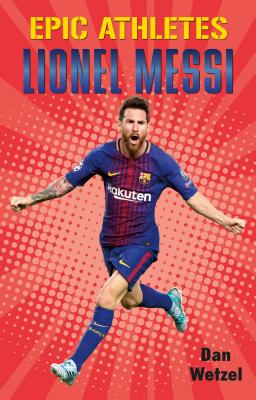 This is book number 6 in the Epic Athletes series.

Renowned sports journalist Dan Wetzel shoots and scores with Epic Athletes: Lionel Messi, an inspiring young readers biography of a soccer great who rose from an underdog to a champion!

Lionel Messi has taken the soccer world by storm. He scored the most goals in a season. He's racked up championships. There was even a statue built in his honor. Despite the accolades, he's still hungry for more goals, more championships, more opportunities to shine on the soccer pitch. Messi's drive to succeed has motivated him ever since he first stepped on his local, worn down field as a kid.

Yet his success didn't come without bumps in the road. Diagnosed with a career-threatening medical condition at ten, Messi refused to give up on his dream, and went on to amass one of the greatest careers in sports history. Filled with sports action and bold illustrations, this thrilling biography details the rise of a living soccer legend.

* "Wetzel knows how to organize the facts and tell a good story. His insights into high school, collegiate, and professional basketball, along with his use of well-chosen quotes from insiders, make this book an unusually informative and enjoyable sports biography for young readers." —Booklist, starred review for Epic Athletes: Stephen Curry