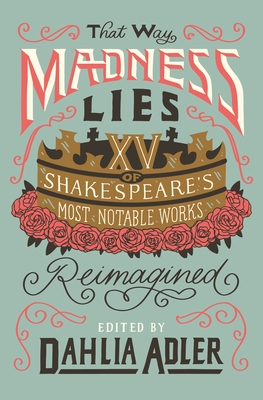 “From comedy to tragedy to sonnet, from texts to storms to prom, this collection is a knockout.” —BuzzFeed.com

West Side Story. 10 Things I Hate About You. Kiss Me, Kate. Contemporary audiences have always craved reimaginings of Shakespeare’s most beloved works. Now, some of today’s best writers for teens take on the Bard in these 15 whip-smart and original retellings!

DAHLIA ADLER is an editor by day, a freelance writer by night, and a Young Adult author at every spare moment in between. She is the founder of LGBTQReads, editor of several anthologies, and author of many novels, including Cool for the Summer and Home Field Advantage. She lives in New York with her family and an obscene number of books.

A Bank Street Best Book of the Year

“From comedy to tragedy to sonnet, from texts to storms to prom, this collection is a knockout.” —BuzzFeed.com

“Thoughtfully curated, this sumptuous anthology reframes Shakespeare’s work, linking themes to contemporary concerns while bringing a critical eye to the originals’ cultural assumptions. With its range of narrative styles and diverse protagonists, this collection offers much to savor.” —Publishers Weekly

“That Way Madness Lies is a must-read for theater kids ready to consider their favorite comedies and tragedies in a new way, as well as Shakespeare skeptics.” —Booklist

“The stories stand capably on their own merits but will be enriched by familiarity with—or better yet, reading alongside—Shakespeare’s original plays and sonnets. Budding writers may even be inspired to put their own spins on the Bard of Avon’s timeless tales.” —BookPage

“Ranging from grim and gritty to starry-eyed and futuristic, these 15 stories retell the Bard’s works as they’ve rarely been presented before. A radical reimagining and avant-garde interpretation of Shakespeare.” —Kirkus Reviews

“That Way Madness Lies is a stunning collection of laughs, heartbreak, and beauty. The authors and the source material shine in this book.” —PaperbackParis.com

“That Way Madness Lies is a spectacular, spell-binding Shakespearean collection that you will fall deeply in love with...Each tale is a gem in the glittering crown of this anthology, which is one of the best anthologies I’ve ever read.” —TheNerdDaily.com

Praise for HIS HIDEOUS HEART

“Adler’s anthology brims over with fierce delight and uncanny invention; the stories here vary in their effect nearly as much as Poe’s do. If you haven’t read Poe before, His Hideous Heart works equally well as an introduction, a tribute and a loving critique.” —The New York Times Book Review

“A genre-bending collection of 13 twists on Edgar Allan Poe’s works does Poe proud with this creepy and atmospheric set of stories inspired by a handful of his most well-known works. Diversity in race, gender identity, and sexuality is well-represented. Poe’s ghost happily haunts this fresh, delightfully dark collection.” —Kirkus Reviews, starred review

“While we love Edgar Allan Poe—the original sadboi and Halloween’s unofficial literary mascot—we have to admit that his 150-year-old stories could use a 2019-worthy glow-up. The YA story collection His Hideous Heart takes that challenge and runs with it. Each of the anthology’s contributors revamp or totally reinvent 13 of Poe’s best-known stories and poems, imbuing most of them with a much-needed dose of feminism, LGBTQ representation, and racial diversity.” —HelloGiggles.com