We Are All So Good at Smiling (Hardcover) 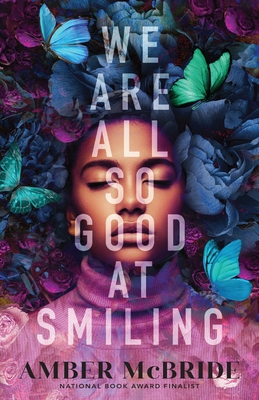 They Both Die at the End meets The Bell Jar in this haunting, beautiful young adult novel-in-verse about clinical depression and healing from trauma, from National Book Award Finalist Amber McBride.

Whimsy is back in the hospital for treatment of clinical depression. When she meets a boy named Faerry, she recognizes they both have magic in the marrow of their bones. And when Faerry and his family move to the same street, the two start to realize that their lifelines may have twined and untwined many times before.

They are both terrified of the forest at the end of Marsh Creek Lane.

The Forest whispers to Whimsy. The Forest might hold the answers to the part of Faerry he feels is missing. They discover the Forest holds monsters, fairy tales, and pain that they have both been running from for 11 years.

Amber McBride estimates she reads about 100 books a year. Her work has been published in literary magazines including Ploughshares and Provincetown Arts. Her debut young adult novel, Me (Moth) was a finalist for the National Book Award, and won the 2022 Coretta Scott King/John Steptoe Award for New Talent, among many other accolades. She is a professor of creative writing at University of Virginia, and lives in Charlottesville, Virgina.

"Stunning... Readers will revel in the depth of Whimsy and Faerry’s relationship, all the while finding solace and relief in the calculated messiness of their search for wholeness." —Booklist, starred review

"This phenomenal novel-in-verse transports readers into an impassioned tale of heartache and hope that belongs on every bookshelf serving teens." —School Library Journal, starred review

"Raw and poignant and promising hope, even when it seems there is no way out." —Shelf Awareness, starred review

"The choice of verse to tell this absorbing story is a strong one; readers are drawn along by the intense and vivid imagery, and the depictions of clinical depression, guilt, and grief are visceral. McBride explores the impact of the intersection between Blackness and mental illness ... and the difficulties of two unusual young people finding refuge through friendship from the pressures the world exerts on them. Whimsy’s practice of Hoodoo and the empowerment she receives from the magic inside and around her help her contend with her depression and unravel her grief without negating a brutal, yet ultimately hopeful, reality. ..Important messages uniquely delivered." —Kirkus Reviews, starred review

"McBride makes exceptional use of the verse novel format, with some poems reading almost as detailed and descriptive prose, while other entries are just a few judiciously chosen lines that make readers slow down and work a bit to parse out full meaning." —Bulletin of the Center of Children's Books, starred review

"Elevates everything that made McBride’s debut novel, Me (Moth), such a success. Readers ... will especially enjoy its blend of magic and emotion." —BookPage

"Raw and poignant and promising hope, even when it seems there is no way out... promises hope." —Shelf Awareness

"McBride’s lush free-verse poetry creates a vibrant world teetering between the real and the magical, but the images and atmosphere act as background to serious issues ... Although the subject matter is heavy, the book serves as a reminder that, as sorrow and loss come for everyone, no one is alone. Back matter addresses mental health and expands on the story’s elements from fairy tales and folklore." —The Horn Book