Larger than Life: Lyndon B. Johnson and the Right to Vote (Hardcover) 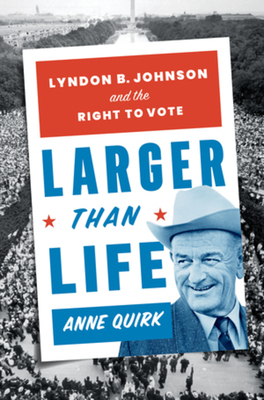 An accessible, informed, and timely biography of Lyndon Johnson that centers his life and presidency around the passage of the Voting Rights Act.

Keenly known for both his triumphs and his failures, Lyndon B. Johnson was one of the most complex and compelling presidents in US history. Anne Quirk’s biography alternates between chapters that follow LBJ’s childhood in rural Texas learning politics from his parents, his time teaching Mexican American students at a small-town school, and his days in Congress as majority leader and as vice president; and chapters that cover his work alongside civil rights leaders and the passage of the Voting Rights Act. An epilogue discusses the Supreme Court’s 2013 ruling that struck down key portions of the act.

With engaging storytelling, Quirk paints a rich portrait of Johnson’s presidency, celebrating the accomplishments of his Great Society programs while refusing to shy away from his catastrophic decisions regarding Vietnam and the summer riots of 1967. Larger Than Life presents striking parallels to today’s political arena: an outsize character presiding over a divided nation—but to different ends.

Anne Quirk was the publisher of the Horn Book Magazine and has worked for various book publishers. She studied history at Dartmouth College and lives in Massachusetts with her family.