The Man Who Ate Too Much: The Life of James Beard (Paperback) 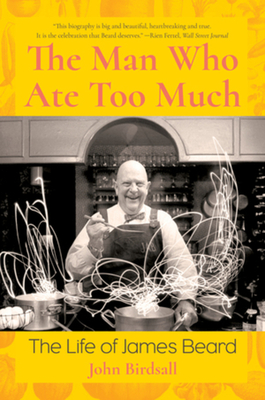 Like its subject, this biography is expansive and entertaining, and rests on a solid body of research and experience. It offers a front row seat to the competitive world of food writing, the development of  an American Cookery champion who incorporated his love of regional French cooking, as well as an insightful history of a gay man who struggled to live an authentic life even as the rules of secrecy and acceptance kept changing.

A Finalist for the 2022 James Beard Foundation Cookbook Award (Writing)

The definitive biography of America’s best-known and least-understood food personality, and the modern culinary landscape he shaped.

In the first portrait of James Beard in twenty-five years, John Birdsall accomplishes what no prior telling of Beard’s life and work has done: He looks beyond the public image of the "Dean of American Cookery" to give voice to the gourmet’s complex, queer life and, in the process, illuminates the history of American food in the twentieth century. At a time when stuffy French restaurants and soulless Continental cuisine prevailed, Beard invented something strange and new: the notion of an American cuisine.

Informed by previously overlooked correspondence, years of archival research, and a close reading of everything Beard wrote, this majestic biography traces the emergence of personality in American food while reckoning with the outwardly gregarious Beard’s own need for love and connection, arguing that Beard turned an unapologetic pursuit of pleasure into a new model for food authors and experts.

Born in Portland, Oregon, in 1903, Beard would journey from the pristine Pacific Coast to New York’s Greenwich Village by way of gay undergrounds in London and Paris of the 1920s. The failed actor–turned–Manhattan canapé hawker–turned–author and cooking teacher was the jovial bachelor uncle presiding over America’s kitchens for nearly four decades. In the 1940s he hosted one of the first television cooking shows, and by flouting the rules of publishing would end up crafting some of the most expressive cookbooks of the twentieth century, with recipes and stories that laid the groundwork for how we cook and eat today.

In stirring, novelistic detail, The Man Who Ate Too Much brings to life a towering figure, a man who still represents the best in eating and yet has never been fully understood—until now. This is biography of the highest order, a book about the rise of America’s food written by the celebrated writer who fills in Beard’s life with the color and meaning earlier generations were afraid to examine.

John Birdsall is a two-time James Beard Award–winning author, a former food critic, and longtime restaurant cook. He is the coauthor of a cookbook, Hawker Fare, with James Syhabout. He lives in Tucson, Arizona.

For the first time, Mr. Birdsall brings both scholarly research and a queer lens to Beard’s life, braiding the strands of privilege and pain, performance and anxiety, into an entirely new story.
— Julia Moskin - New York Times

John Birdsall is not a polite biographer, and I say this with admiration. In his new book, The Man Who Ate Too Much, he pokes and prods at Beard’s most tender places, his hidden traumas, his deepest insecurities. Birdsall gets to what’s often missing from the cheerful narrative of James Beard, shading in the face sketched on medals and vintage book covers — a man known chiefly as a gregarious entertainer, enormous in profile, appetite and knowledge.

A marvel of narrative nonfiction that achieves for 20th-century gay history what Tom Wolfe did for aviation in The Right Stuff, a subjective and objective reconstruction of a neglected American subculture hiding in plain sight.

Like the life of James Beard, this biography is big and beautiful, heartbreaking and true. It is the celebration that Beard deserves.
— Rien Fertel - Wall Street Journal

Beard was both a victim and a perpetrator of multiple erasures, which Birdsall records in meticulous detail… The story of Beard’s life invites us to recognize the violence that was done in the name of American cooking and expand our understanding of authenticity to include not only what’s on the plate but everything around it: the norms, prejudices, economic wounds, environmental traumas, and other social forces that go into the production of food and culinary authority. It’s a reminder that food is part of culture, and terroir not simply a matter of the soil.
— Aaron Timms - New Republic

Birdsall’s sentences have rhythm, too, and compress time and place so that a meal becomes a history... like the greediest of diners, I want more.
— Ligaya Mishan - New York Times Book Review

Food is a haven for Beard in even his lowest moments, and Birdsall, a lovely writer, honors that with delicate reconstructions of flavor.
— Madeline Leung Coleman - The Atlantic

It is fitting that John Birdsall should give this impossibly rich tribute to the gay father of modern American food culture, revealing that it’s not the food but the ingredients within that make the cook a legend. Savoir faire, shade, dish, yearning, hunger, and creative fire made the great James Beard and this joy of a biography possible…Foundational. Important. Indispensable and delectable queer food history at its finest.
— Michael W. Twitty, James Beard Award–winning author of The Cooking Gene

The Man Who Ate Too Much makes a fascinating and persuasive case that [James] Beard was brought to an idea of culinary Americanness by re-experiencing the American West.

The food writer who, more than anyone else, inscribed the idea of an American cuisine, Beard was larger than the sum of his cookbooks and Birdsall brings him to vivid life here.
— Boston Globe

John Birdsall pens what could be the definitive biography of America’s best-known food personality and the national culinary landscape he shaped.
— Fortune

The Man Who Ate Too Much is one of the finest biographies of recent memory and one of the best culinary biographies around. Consider it required reading for anyone seeking to understand the foundations of modern American cooking.

Packed with sensory detail, The Man Who Ate Too Much is a magnificent tribute to a titan of American life, who taught us, through the coded – or universal – language of food, our inalienable right to the pursuit of pleasure.