It Takes Two: Our Story (Hardcover) 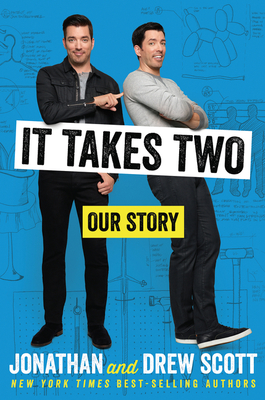 Jonathan and Drew Scott, known for their wildly popular HGTV shows including Property Brothers and Brother vs Brother, follow up their New York Times bestseller, Dream Home, with a highly anticipated memoir. It Takes Two: Our Story shares never-before-revealed tales of the brothers’ childhood and rise to fame—from starting their first business at 7 years old, their years modeling and acting, to their first house purchase at the impressive young age of eighteen. They soon found their true passion in life, combining their natural gifts for entertaining with the skills they learned from buying, renovating, and selling homes.

Complete with hilarious behind-the-scenes stories from set, Jonathan and Drew discuss how their family and upbringing have led to their success in life. Throughout, the brothers keep fans laughing with the clever—and sometimes zany—sibling banter for which they’re known best.

JONATHAN SCOTT, a renowned designer, and DREW SCOTT, a seasoned realtor, star in HGTV’s Property Brothers, Buying & Selling, and Brother vs. Brother. They have worked in real estate for over 15 years. They founded Scott Brothers Entertainment.

DREW SCOTT, a seasoned realtor, and JONATHAN SCOTT, a renowned designer, star in HGTV’s Property Brothers, Buying & Selling, and Brother vs. Brother. They have worked in real estate for over 15 years. They founded Scott Brothers Entertainment.

“Drew and Jonathan came on the the TODAY show and they needed crowd control! And that was just to fend off Al Roker. This duo is magic . . . they have the Midas touch!”
—Kathie Lee & Hoda, co-hosts, the TODAY show

“Jonathan and Drew are a devastating tsunami of talent, both in the home space and beyond. The wisdom they offer the people they help is far beyond their young age and a testament to the dedication they have to those who enter their lives.”
—William Shatner, actor, producer, writer, philanthropist

“Drew and Jonathan exemplify what I call ‘motivational doers.’ While many have made careers just speaking about achieving, we learn in this book how they have created an empire by bridging the gap of talking the talk and walking the walk. Amazing!”
—Terry Crews, actor, world’s strongest industrial designer

“To say the Scott Brothers are Renaissance men would be an incredible understatement. They are talented to the point that, if you bought 20 copies of this book, they could build you the perfect bookshelf to put them on AND then the perfect house to put THAT in. And because of their ‘twinship,’ there would be a handsome pair of bookends to go on either side. Did I mention I’m also jealous of their height?”
—Chris Hardwick, comedian, actor, host, producer, founder & CEO of Nerdist Industries . . . and overachiever