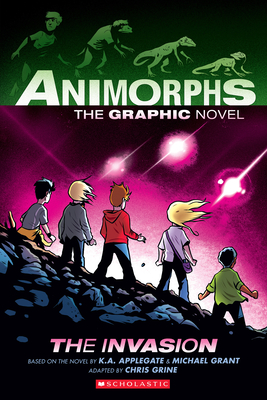 This is book number 1 in the Animorphs series.

The original Animorph books helped introduce me to reading and the fact that they are now in graphic novels is just incredible. While it started out as a chapter book, I think it does so much better as a graphic novel. The illustrations just bring to life the “morphing abilities” of these characters and turns it into a thrill ride.  Just like the Amulet series, this sci-fi adventure with have your kids jumping out of their seats wanting more.

The wildly popular, bestselling sci-fi series by Katherine Applegate and Michael Grant returns in a new full-color graphic novel series, adapted by Chris Grine.
Sometimes weird things happen to people. Ask Jake. He could tell you about the night he and his friends saw a strange light in the sky that seemed to be heading right for them. That was the night five normal kids learned that humanity is under a silent attack -- and were given the power to fight back.

Now Jake, Rachel, Cassie, Tobias, and Marco can transform into some of the most dangerous creatures on Earth. And they must use that power to outsmart an evil greater than anything the world has ever seen. . . .

K.A. APPLEGATE is the author of the bestselling Animorphs series, as well as the Remnants and Everworld series, Home of the Brave, and the Roscoe Riley Rules series. She lives in Tiburon, California.

CHRIS GRINE is the creator of the Eisner Award-nomicated Chickenhare and Time Shifters. He’s been making up stories since he was a kid, and not just to get out of trouble with his parents. Nowadays, Chris spends most of his time writing and illustrating books, drinking lots of coffee, and sleeping as little as possible. He spends his free time with his wife, playing with his kids, watching movies, and collecting action figures (but only the bad guys).

"[The Animorph books] were dark and witty and thrilling, endlessly inventive and achingly sad. They made me laugh out loud and cry myself to sleep. I've been thinking about them for twenty years." -- The Paris Review

"There's clearly something about Animorphs that has kept kids enthralled." -- Publishers Weekly

"As satisfying and enjoyable as a big-budget animated sci-fi feature." -- Kirkus Reviews