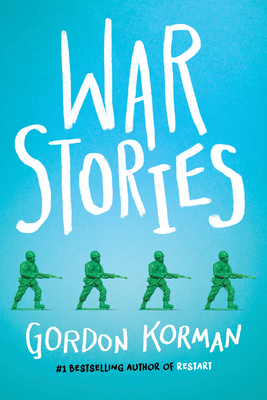 I am used to laughing through a Korman story, but I was riveted by this poignant portrayal of a great grandfather and grandson, bonded by WWII. With flashbacks to the war and plenty of military action, each character’s honor shines through, including the grandson’s. I would love to have them in my family!

A story of telling truth from lies - and finding out what being a hero really means.

There are two things Trevor loves more than anything else: playing war-based video games and his great-grandfather Jacob, who is a true-blue, bona fide war hero. At the height of the war, Jacob helped liberate a small French village, and was given a hero's welcome upon his return to America.

Now it's decades later, and Jacob wants to retrace the steps he took during the war - from training to invasion to the village he is said to have saved. Trevor thinks this is the coolest idea ever. But as they get to the village, Trevor discovers there's more to the story than what he's heard his whole life, causing him to wonder about his great-grandfather's heroism, the truth about the battle he fought, and importance of genuine valor.

Gordon Korman is the #1 bestselling author of three books in The 39 Clues series as well as eight books in his Swindle series: Swindle, Zoobreak, Framed, Showoff, Hideout, Jackpot, Unleashed, and Jingle. His other books include This Can't Be Happening at Macdonald Hall! (published when he was 14); The Toilet Paper Tigers; Radio Fifth Grade; Slacker; Restart; Whatshisface; Level 13; the trilogies Island, Everest, Dive, Kidnapped, and Titanic; and the series The Hypnotists and On the Run. Gordon grew up in Thornhill, Ontario and he lives in New York with his family. Visit him online at www.gordonkorman.com.

"A gem for readers looking for a book where the underdog comes out on top." -- Voice of Youth Advocates

* "This rewarding novel features an engaging main character and some memorable moments of comedy, tenderness, and reflection." -- Booklist, starred review