The Battle for Perodia: A Branches Book (The Last Firehawk #6) (Library Binding) 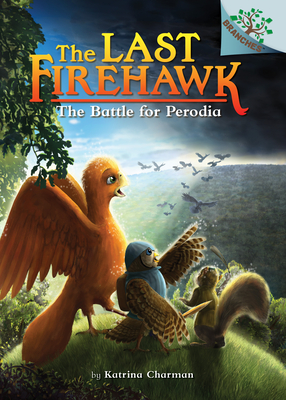 This is book number 6 in the The Last Firehawk series.

The time has come to fight for the enchanted land of Perodia!
Pick a book. Grow a Reader!

Get ready for an epic battle! Tag, Skyla, and Blaze call on their friends to help them in the fight against the powerful vulture Thorn. Blaze will finally learn how to use the magical Ember Stone... but will its magic be strong enough to defeat Thorn and his army of spies? In this battle, only the brightest magic can defeat the Shadow!

Katrina Charman was the recipient of the SCBWI British Isles' Margaret Carey scholarship for fiction in 2013, and in 2014 she was one of the winners of the SCBWI's Undiscovered Voices competition. Katrina's first children's book, the early reader The Ninjabread Man, was published with Franklin Watts (UK) in July 2015. The Last Firehawk is her first early chapter book series. Katrina lives in South East England with her husband and three daughters.

Judit Tondora was born in Hungary. She is an illustrator and graphic designer who has worked for various clients in the world of publishing and commercial design.

Jeremy Norton is a British illustrator who lives and works in Barcelona, Spain. The Last Firehawk is the first early chapter book series he has illustrated. He works digitally, and aims to convey a childlike sense of wonder through his artwork.

A Publishers Weekly bestselling series!
Praise for The Crystal Caverns (The Last Firehawk #2):

"The myriad black-and-white images and easy-to-read text make this an apt read for those making the transition from early readers to longer books. The book includes reading comprehension questions and activities to help readers immerse themselves in Tag's world. A nifty addition to the series." -- Kirkus Reviews

Praise for The Ember Stone (The Last Firehawk #1):

"The first book in this new series brings the animal fantasy genre to early chapter book readers... The adventure is nonstop, making this an ideal choice for reluctant readers. VERDICT: A strong beginning to an adventure series for chapter book readers, especially those who are not quite ready for Erin Hunter's 'Warriors' or Kathryn Lasky's 'Guardians of Ga'Hoole.'" -- School Library Journal

"A promising start to a series for fledgling fantasy readers." -- Kirkus Reviews