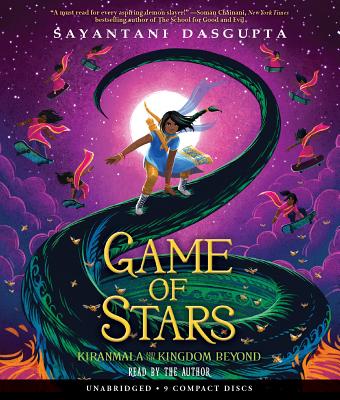 By Sayantani DasGupta
Email or call for price.
Special Order

This fast-paced and zany installment picks up four months after Book One. Princess Kiranmala must battle rakkhosh, ghosts, and witches in the Kingdom Beyond’s game show: Who Wants To Be A Demon Slayer? If she doesn’t, Kiran may never see her good friend Prince Neel again — never mind restore order to the kingdom. When you finish, be sure to read the author’s note; I love how Dasgupta draws on Indian culture and is inspired by Bengali folklore and tales from her childhood.

The sequel to the critically acclaimed debut-fantasy The Serpent's Secret!
Book Two finds Kiran back in New Jersey, but now her awareness of the Kingdom Beyond has given her a window into another dimension. A dimension in which friends are imperiled, society is fraying, and her return in imminent and unavoidable.

What will it take to be made into an action figure? Maybe this time...

Sayantani DasGupta is the New York Times bestselling author of the critically acclaimed, Bengali folktale and string theory-inspired Kiranmala and the Kingdom Beyond books, the first of which -- The Serpent's Secret -- was a Bank Street Best Book of the Year, a Booklist Best Middle Grade Novel of the 21st Century, and an E. B. White Read Aloud Honor Book. Sayantani is a pediatrician by training, but now teaches at Columbia University. When she's not writing or reading, Sayantani spends time watching cooking shows with her trilingual children and protecting her black Labrador retriever Khushi from the many things that scare him, including plastic bags. She is a team member of We Need Diverse Books, and can be found online at sayantanidasgupta.com and on Twitter at @sayantani16.