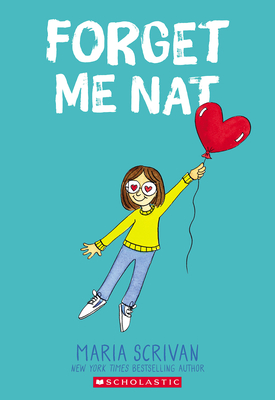 This is book number 2 in the Nat Enough series.

I couldn’t wait to get back into Nat’s world of hilarious chaos! Hit with her first crush, everything is hearts and floating on air, but is she being true to herself? A wonderful second book in the series!

Companion to the New York Times bestseller Nat Enough!
It's called a crush for a reason...

For the first time in her life, Natalie feels confident. Her talents are being recognized, she has supportive friends, and she's spending a ton of time with her crush, Derek! But when Derek tells Natalie that he just wants to be friends, Natalie's self-confidence quickly changes to self-doubt. As she tries to recover from her broken heart, Natalie casts aside her talents and even her friends. With no one to turn to, Natalie will have to pull herself out of this mess on her own.

Maria Scrivan is an award-winning syndicated cartoonist and New York Times bestselling author based in Stamford, Connecticut. Her laugh-out-loud comic, Half Full, appears daily in newspapers nationwide and on gocomics.com. Maria licenses her work for greeting cards, and her cartoons have also appeared in MAD Magazine, Parade, and many other publications. Maria's graphic novels, Nat Enough and Forget Me Nat, were both released in 2020 to great acclaim. Visit Maria online at mariascrivan.com.

"One of the highlights of the Nat series has been the way Scrivan brings her well-honed skills as a syndicated daily newspaper cartoonist to the drawing table... An absolute joy to behold." -- The Beat

"Maria writes funny, Maria draws funny, and Maria does it with a ton of heart." -- Jim Davis, creator of Garfield

"What elevates Maria Scrivan's graphic novel is the refreshing honesty with which it approaches its subject matter. The tone is instructive but not preachy, as Natalie develops her talents as a cartoonist and discovers her individuality, which brings her not only the acceptance of others but, more importantly, self-acceptance." -- Financial Times

"With the humor and illustrative style of a daily newspaper comic, debuting creator Scrivan's story of middle school minefields is gentle and timeless." -- Publishers Weekly

"Scrivan's exuberant, comic strip-esque art and simple dialogue will entice a range of readers, who will relate to Nat's insecurities." -- School Library Journal

"This story of growing up is a perfect read for students new to middle school and those questioning where their talents lie." -- Booklist