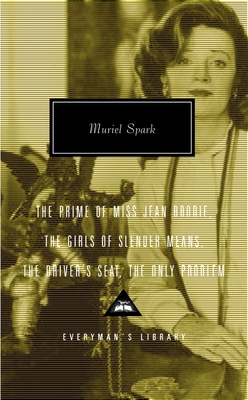 By Muriel Spark, Frank Kermode (Introduction by)
Email or call for price

The brevity of Muriel Spark’s novels is equaled only by their brilliance. These four novels, each a miniature masterpiece, illustrate her development over four decades. Despite the seriousness of their themes, all four are fantastic comedies of manners, bristling with wit.

Spark’s most celebrated novel, The Prime of Miss Jean Brodie, tells the story of a charismatic schoolteacher’s catastrophic effect on her pupils. The Girls of Slender Means is a beautifully drawn portrait of young women living in a hostel in London in the giddy postwar days of 1945. The Driver’s Seat follows the final haunted hours of a woman descending into madness. And The Only Problem is a witty fable about suffering that brings the Book of Job to bear on contemporary terrorism.

All four novels give evidence of one of the most original and unmistakable voices in contemporary fiction. Characters are vividly etched in a few words; earth-shaking events are lightly touched on. Yet underneath the glittering surface there is an obsessive probing of metaphysical questions: the meaning of good and evil, the need for salvation, the search for significance.

MURIEL SPARK was born in Edinburgh, Scotland, in 1918. She is the author of over twenty novels as well as collections of short stories. Her most celebrated works include The Prime of Miss Jean Brodie (1961), Loitering with Intent (1981), The Comforters (1957), The Public Image (1968), The Girls of Slender Means (1963), The Driver’s Seat (1970) and Aiding and Abetting (2001). She was awarded the OBE in 1993 and is a Dame of the British Empire. She has also been awarded the honorary degree of Doctor of Letters by the University of Edinburgh, as well as the James Tait Black Memorial Prize. She lives in Tuscany.

“Muriel Spark is one of the few writers on either side of the Atlantic with enough resources, daring, and stamina to be altering, as well as feeding, the fiction machine…We are never out of touch in a Spark novel with the happiness of creation; the sudden willful largesse of magic and wit, the cunning tautness of suspense.”–John Updike, The New Yorker

“One of our greatest living novelists.” –The Times

“[Spark is] one of this century’s finest creators of comic-metaphysical entertainment.” –New York Times

“Some of [Spark’s] finest fictions are novellas rather than novels, short enough to be read in a single dizzying sitting.” –David Lodge

“[Spark] has written some things that seem likely to go on being read as long as fiction in English is read at all.” –New York Times Book Review