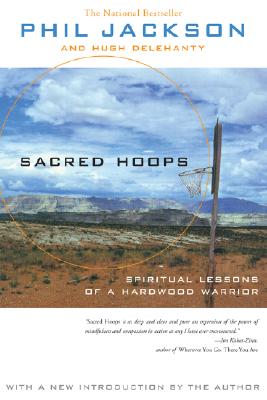 With a new introduction, Phil Jackson's modern classic of motivation, teamwork, and Zen insight is updated for a whole new readership

Eleven years ago, when Phil Jackson first wrote these words in Sacred Hoops, he was the triumphant head coach of the Chicago Bulls, known for his Zen approach to the game. He hadnt yet moved to the Los Angeles Lakers, with whom he would bring his total to an astounding nine NBA titles. In his thought-provoking memoir, he revealed how he directs his players to act with a clear mind--not thinking, just doing; to respect the enemy and be aggressive without anger or violence; to live in the moment and stay calmly focused in the midst of chaos; to put the "me" in service of the "we" -- all lessons applicable to any person's life, not just a professional basketball player's. This inspiring book went on to sell more than 400,000 copies.

In his new introduction, Jackson explains how the concepts in Sacred Hoops are relevant to the issues facing his current team--and today's reader.

Phil Jackson is an American original. A two-time All-American at the University of North Dakota, in 1967 he was drafted by the New York Knicks, where he played for 11 years and was a member of the 1970 and 1973 championship teams. Jackson guided the Chicago Bulls to six NBA championships in his nine years as head coach from 1989-1998, and guided the LA Lakers to three titles as their head coach from 1999-2004. Hugh Delehanty is the editor-in-chief of AARP publications, who has written about sports and psychology for Sports Illustrated, Tricycle: The Buddhist Review, and other publications. He lives with his wife, Barbara, in New York City.