The Most Spectacular Restaurant in the World: The Twin Towers, Windows on the World, and the Rebirth of New York (Hardcover) 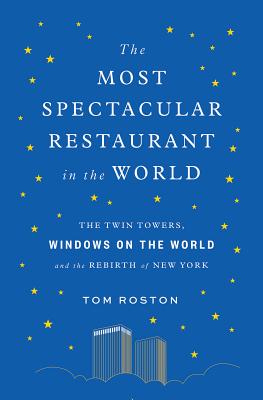 By Tom Roston
Email or call for price

The remarkable story of a restaurant on top of the world—built by a legend, destroyed in tragedy—and an era in New York City it helped to frame

In the 1970s, New York City was plagued by crime, filth, and an ineffective government. The city was falling apart, and even the newly constructed World Trade Center threatened to be a fiasco. But in April 1976, a quarter-mile up on the 107th floor of the North Tower, a new restaurant called Windows on the World opened its doors—a glittering sign that New York wasn’t done just yet.

In The Most Spectacular Restaurant in the World, journalist Tom Roston tells the complete history of this incredible restaurant, from its stunning $14-million opening to 9/11 and its tragic end. There are stories of the people behind it, such as Joe Baum, the celebrated restaurateur, who was said to be the only man who could outspend an unlimited budget; the well-tipped waiters; and the cavalcade of famous guests, as well as everyday people celebrating the key moments in their lives. Roston also charts the changes in American food, from baroque and theatrical to locally sourced and organic. Built on nearly 150 original interviews, The Most Spectacular Restaurant in the World is the story of New York City’s restaurant culture and the quintessential American drive to succeed.

A journalist for over 20 years, Tom Roston worked at The Nation and Vanity Fair, and was a senior editor at Premiere for a decade. His work has appeared in The New York Times, Fast Company, New York Magazine, Food Republic, Salon, and more. He lives in Brooklyn, New York.

“Within ten pages, I pushed aside everything else I was doing and read the book for hours, because Roston has written something far more illuminating and edifying than a chronicle of this ridiculously audacious achievement, feeding people a quarter of a mile in the sky. … Roston has crafted the most detailed, all-consuming and thoroughly spellbinding portrait of my hometown during this daunting, delirious decade that I’ve ever read. … If you love this city (and if you don’t, better not tell me), grab this book.”
— Hal Rubinstein, Forbes

STARRED REVIEW “A detailed, inspiring, and horrifying account of the restaurant that sat atop the North Tower of the World Trade Center. Former Premiere senior editor Roston returns with a rich, complex account of Windows on the World.”
— Kirkus Reviews

STARRED REVIEW “Billed as a history of Windows on the World, the 107th-floor restaurant in the World Trade Center that ruled the New York City skyline from April 1976 until September 11, 2011, this engrossing tale delivers much more.”
— Booklist

“The book offers a completely new perspective on the history of the acclaimed establishment, which opened its doors in 1976.”
— Fortune Magazine

“Much more than a history of a restaurant spectacular for its views, Roston has woven together a riveting history of New York City since its near collapse in the 1970s and intriguing stories about the restaurant business. The terrible tragedy of 9/11 looms, but there is also a heartening theme of how even the worst architectural excrescence can be transformed by people and imagination. The World Trade Center was cold and ugly from its inception, but its restaurant was magical."
— Paul Freedman

“This book, as bold and opinionated as a true New Yorker, offers a well-documented account of what it takes to create and manage the highest kitchen in the world. Its author is not afraid to call a coq-au-vin a coq-au-vin and does not suffer from vertigo. Bravo, the result has great balance, despite the strong winds of adversity found at such altitude!”
— Philippe Petit

“New Yorkers have seen many fine restaurants come and go, but losing Windows on the World to the terrorism that came to NYC on Sept 11, 2001 left a void in the city’s dining experiences that will go unfilled. The restaurant was as iconic in its own right as the Twin Towers. Thankfully, Tom Roston documents this unforgettable restaurant in a book worthy of that once magical New York destination.”
— David N. Dinkins

“With exhaustive research and crystalline writing, Tom Roston unspools the glamorous story of a culinary temple in the sky, of cooks and busboys proud to work amidst clouds, and of an era that today seems romantic and innocent. The book frequently makes the heart swell, but never more than in its account of an undocumented immigrant who rose from stock boy to manager, and whose story (the breathtaking end I’ll leave your heart to discover) is America’s story. Roston’s book is a riveting account, not only of a one-of-a-kind dining room, but of the evolution of New York City’s restaurant business itself, a concentration of talent, industry and imagination forever the envy of the globe.”
— Ted Allen, host of “Chopped,” Food Network