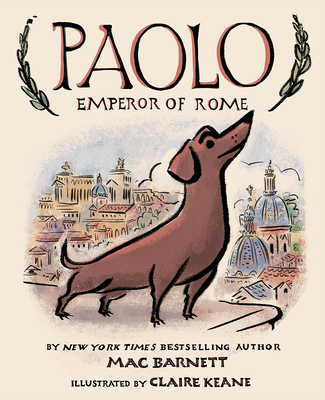 Paolo's view of the vibrant Roman streets is through a glass door.... until the day he seizes his opportunity to roam freely. His pluck and heroism serve him well as he discovers what one of the world's most beautiful cities has to offer. Charming and gorgeously illustrated!

Mac Barnett is the coauthor of the Terrible Two series and the author of many picture books, which have won multiple Caldecott Honors. Claire Keane studied graphic design in Paris before moving to Los Angeles, where she worked at Walt Disney Feature Animation for 10 years and contributed to Frozen, Tangled, Enchanted, and many other films. She now lives in Venice Beach, California, where she writes and illustrates children’s books.

**STARRED REVIEW**.
"Both Keane's art and Barnett's plucky hero give the big city of Rome an exciting and inviting feel, making it a delightful adventure for readers and travelers of all ages."
— Shelf Awareness

“Joyful…Claire Keane’s illustrations evoke the noise and vitality of Rome at its most rewarding. [A] charmer.”
— Wall Street Journal

"In a single day, Paolo wins over the dogs of Rome, its people, and the pope; he’ll just as easily endear himself to readers."
— School Library Journal

"Readers will be endeared to Paolo instantly, with his lust for life and pluckiness in the face of adversity. Barnett’s text is simple but imbued with a sense of dramatic beauty and humor. Keane’s illustrations recall gorgeous pastel crayons swept across the page, capturing the elegance of Rome and the charm of the adorable pooch at the heart of the story."
— Booklist